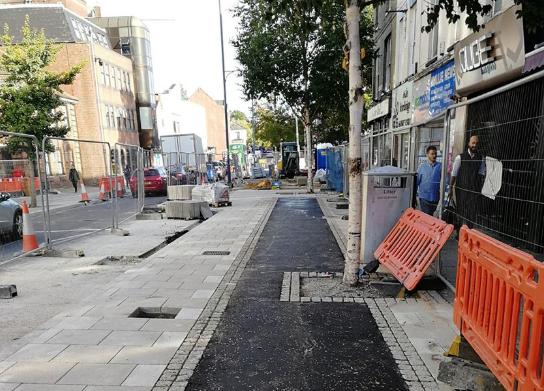 Infrastructure has "has the potential to become a defining meme for inept design" says Norwich Cycling Campaign...
by Simon_MacMichael

Cycling campaigners say that a new segregated cycle lane being built in Norwich will make the city “a national laughing stock” – because it has trees planted in the middle of it.

The infrastructure is being constructed on the footway on one side of Prince of Wales Road, a main road which runs one way eastwards from the city centre to Norwich railway station, and will enable cyclists to ride in the opposite direction.

It is being built by Transport for Norwich, which is a partnership between Norfolk County Council and Norwich City Council and is mainly financed by the government’s Transforming Cities Fund.

In a post on its website, Norwich Cycling Campaign slams an “inept design” that does not reflect what the council originally promised, and that including such hazards while the facility is still being built will put cyclists and pedestrians in danger.

“This new route is likely to be very popular, providing as it does a contraflow along Prince of Wales Road and offering for the first time a direct route from the station to the city.

“But it is so obviously totally unfit for purpose. This is in a very high profile place and has the potential to become a defining meme for inept design.

“Spending thousands of pounds of public money on unusable facilities will make the City Council and our fine city a national laughing stock.”

A photo on the group's Facebook page shows the bed for a tree extending more than halfway across the cycle lane, but a Transport for Norwich spokesman told the Eastern Daily Press that criticism of the route was unwarranted, saying: “Comments are being passed on a scheme which is still under construction.

"The trees are at the edge of an extended pavement which will be levelled off providing a much wider area for cycling and the designs which were consulted on widely have passed all necessary safety checks.

"The London Cycle Design Standards acknowledge the constraints of the local environment and are applied to all Transport for Norwich schemes whilst taking the needs and safety of all users into consideration.”

He added: "The route is uphill and in a busy city centre location so is not designed to be used at speed, but seeks to minimise issues with pedestrians and parked cars whilst improving the overall appearance of the area, reducing our environmental impact and providing direct access to the city centre."

However, Richard Jennings, chair of Norwich Cycling Campaign, said: “Norwich City Council have repeatedly stated they are following London Cycle Design Standards, but nowhere can I find a statement that says a tree pit in the middle of a cycle lane is good practice.

"This design and construction should never have been approved by the Norwich Highways Agency Committee.

“Norwich has an increasing number of people cycling, improving their health and reducing air pollution for everyone, yet wasting public money like this is an embarrassment for the city,” he added.