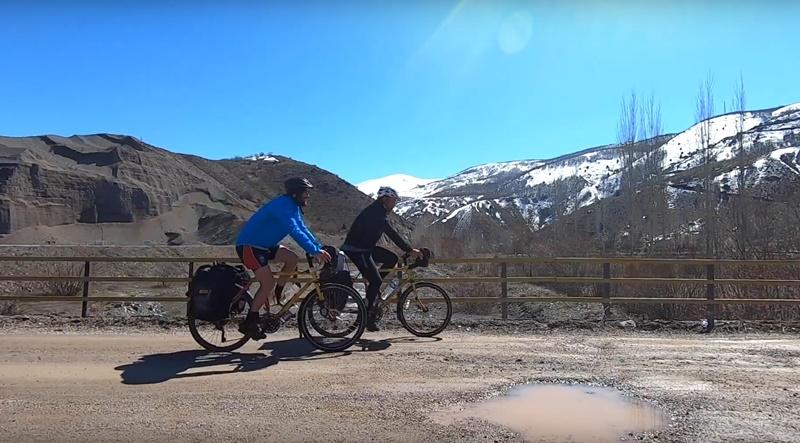 Two cyclists have delivered referee Nigel Owens’ whistle for the opening game of the Rugby World Cup in Japan, having set off from Twickenham on February 2.

Ron Rutland and James Owens have covered 12,485 miles across 27 countries to reach the World Cup, raising over £65,000 for the tournament's official charity, ChildFund Pass It Back.

Rutland has done this before. When the tournament was staged in England in 2015, the 45-year-old rode unsupported from South Africa to get there.

He said he was glad of the company this time around.

“If I was on my own, it would have been much harder,” he told SCMP. “In Africa, I would see something, like a sunset while camping on the Zambezi. But I’d say to myself, ‘how cool would this have been to share this with someone’. On this trip I had that shared experience.”

Rutland had a hip replacement in 2018 and consulted his doctor before surgery about whether the ride would be feasible.

The doctor was Owens’ father, which is how the two first got in touch.

“We spent five days together in total before we started but we soon got to know each other,” said Rutland.

Owens also had a tough 2018, spending most of the year recovering from a broken leg.

He struggled early on and for a while Rutland carried his gear. However, the 28-year-old got stronger as the journey went on and when Rutland had a knee infection in Hong Kong, Owens returned the favour and carried his partner’s gear to Shanghai.

"When I set off I didn't really know what I'd got myself into," Owens told the BBC. "I've just been stubborn. It's a case of putting my head down and going until I get there.

"It's almost so surreal that it doesn't really sink in. I wouldn't be surprised if it hits me during the opening game that I'm actually in a World Cup stadium and that it's started."

“Handing over the whistle to Nigel this afternoon was just the most surreal experience,” said Rutland. “Somewhat bittersweet because James and I have been through so much in the last 230 days.”