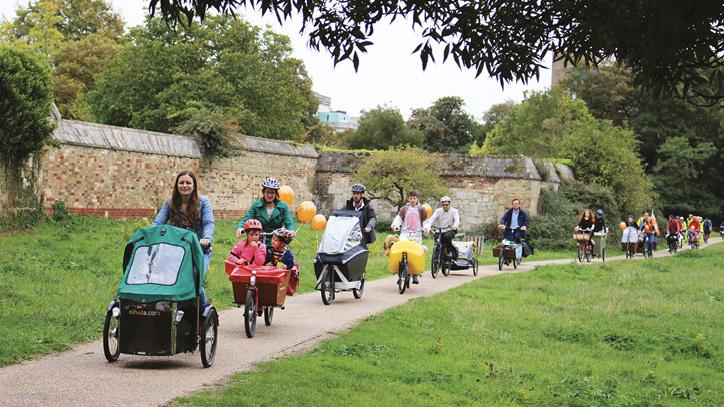 The Cambridge Festival of Cycling returns for its second edition next month, with a host of events taking place in and around the UK’s leading city for cycling throughout September.

Organised by local cycle campaign group Camcycle alongside partner organisations, the festival starts on Sunday with a family-friendly social ride from outside the Guildhall, Market Square, to Milton Country Park.

Other events during the festival, which “aims to celebrate the amazing cycling culture we have here in Cambridge and encourage more people of all ages and abilities to get pedalling,” include bike maintenance and photography workshops, a film night featuring the cargo bike documentary MotherLoad, as well as performance of Much Ado About Nothing by Shakespearean cycling troupe, the HandleBards.

The flagship event of the month is the Cargo Carnival, which takes place on 21 September and includes a Cargo Bike parade, cargo bike and family cycle tryouts and a fair featuring traders who use cargo bikes as an integral part of their businesses, whether that be selling food or drink or providing services.

A new event this year is CamcycleTech, which explores the science and technology of cycling and which has been developed by Camcycle in partnership with the Museum of Technology and the Cavendish Laboratory.

While most events are free, some have a nominal charge to cover costs and you can find out full details of all the activities going on throughout the month on the Cambridge Festival of Cycling website.

“Just like last year, we expect this Festival to encourage more people to start cycling, to try new cycling routes and perhaps try out a new cargo bike.

“This year #CamcycleFest will be bigger and better and we hope to see lots of new faces at our events, everyone is welcome!

“I would also like to thank our sponsors Cambridge City Council, Cambridge Independent, CityChanger CargoBike and Tees Law and to our many volunteers who have made this year’s Festival possible.”