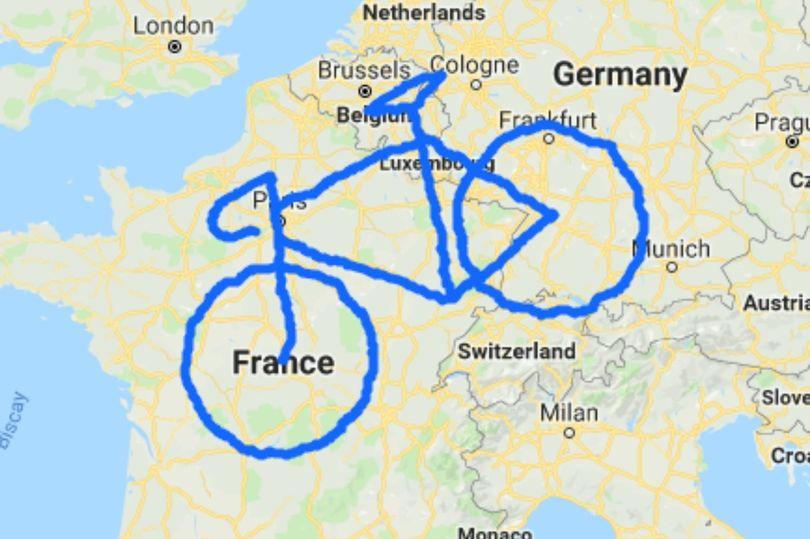 They're winging the route a little bit, but the message is a strong one...
by Simon_MacMichael

A Lincolnshire couple riding 6,000 kilometres through Europe with their dog with their route tracing the outline of a huge bicycle to encourage people to give up driving and fight climate change.

Daniel Rayneau-Kirkhope and his wife Arianna Casiraghi, together with their pup Zora, are riding through France, Switzerland, Austria, Germany, Belgium, Luxenbourg and the Netherlands on their trip, reports Lincolnshire Live.

"We have been thinking about our project for over a year now but we waited to put it into action until my wife had concluded other projects at work," said Mr Rayneau-Kirkhope.

"In the last few months before the departure we have been both very busy with several aspects of the planning: mostly building the bicycles and making the website for our trip.

"The route was planned by my wife Arianna by simply tracing a bicycle onto Google maps, not looking too much into the details of exactly where we would pass!"

He said that the couple had been inspired to undertake the bike ride to help fight the climate emergency.

"I think there is an increasing difference between what climate scientists are saying we have to do and what politicians are doing," Mr Rayneau-Kirkhope said.

"There was a study recently saying that if we carry on emitting greenhouse gases as we are now, within 80 years or so the Sahara desert will extend up to northern France making much of Europe uninhabitable. And yet we see politicians say very little on the matter, and do even less.

"The recent heatwave in Europe was made around five times more likely to happen as a result of man-made climate. This is causing problems for food production already and it will get worse. We have to act now to save our environment.”

They’ve had a lot of support at the roadside. Mr Rayneau-Kirkhope  said: "During the heat wave, we stopped to take a photo on the side of the road and the owners of the house we were stood in front of invited us in for a drink and an ice-cream," said Daniel.

"We also met a lovely couple whose garden we camped in, they were so enthusiastic about what we were doing that they spent half an hour phoning different people before managing to arrange an interview with the local newspaper. It was rather surreal!

"We hope to convey the simple message that bicycles can be a fun, green, healthy way to travel. Up to 50 per cent of car journeys in Europe are less than 5kn long so, for the majority of people, it would be possible to do them on a bicycle.

"For future projects, after we complete our bicycle route, we hope to go away on a free route speaking in schools about climate change and promoting the bicycle. We hope to spend a further six months cycling, after the four months we planned for the bicycle shaped route." he added.