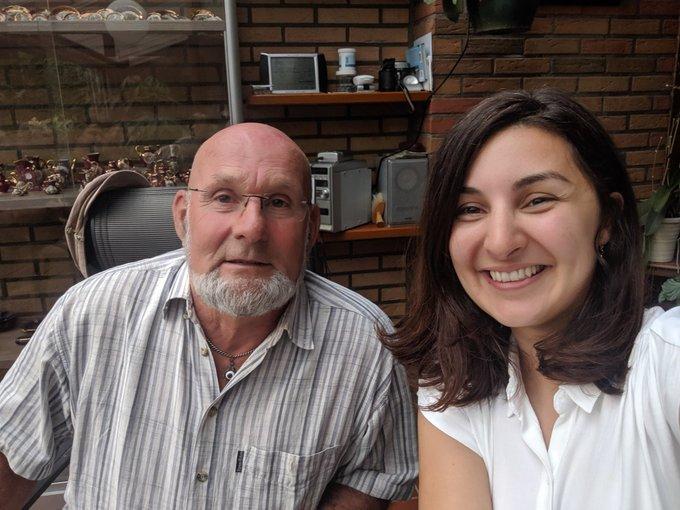 Mevan Babakar's tweet went viral - and within 36 hours the pair were reunited after 25 years...
by Simon_MacMichael

A woman has tracked down a kindhearted aid worker who gifted her a bicycle when she was a five-year-old child living in a refugee shelter in the Netherlands.

The woman, named Mevan Babakar, posted a picture of the man on Twitter on Mondayy, together with a message that read: “Hi internet, this is a longshot BUT I was a refugee for 5 yrs in the 90s and this man, who worked at a refugee camp near Zwolle in the Netherlands, out of the kindness of his own heart bought me a bike.

“My five year old heart exploded with joy. I just want to know his name. Help?”

Hi internet, this is a longshot BUT I was a refugee for 5 yrs in the 90s and this man, who worked at a refugee camp near Zwolle in the Netherlands, out of the kindness of his own heart bought me a bike. My five year old heart exploded with joy. I just want to know his name. Help? pic.twitter.com/XzUgHzllYb

BBC News reports that Ms Babakar’s family is Kurdish and fled Iraq during the first Gulf War, passing through Turkey, Azerbaijan and Russia before reaching the camp in the Netherlands, where they spent a year.

They subsequently settled in London, where she works as a tech manager, and she had taken a break to revisit her journey as a child refugee and was in Zwolle carrying out research.

Yesterday, Ms Babakar, now aged 29, tweeted, “WE FOUND HIM!!” and that contact had been made with the man’s family.

She continued: “Not only did I find him, but I've also had other refugees reach out to me and tell me that him and his wife helped them too! Their kindness has touched so many lives. One woman said ‘they weren't friends to me, they were family’.

“Someone else who worked at the camp got in touch, Sandra, she was incredible too, she helped me use a computer for the first time! I now work in tech! More so than anything I remember these small kindnesses growing up, they helped shape me.

Yesterday evening, less than 36 hours after her initial tweet, the pair met in person at the home in Germany of the aid worker, who is named Egbert.

This is Egbert. He's been helping refugees since the 90s. He was so happy to see me. He was proud that I'd become a strong and brave woman. He said that was his wish for me when I was small. He grows orchids. He has a beautiful family. He said it felt like I'd never left. pic.twitter.com/WlDWm2seVh

"He thought the bike was too small a gesture to make such a big fuss about but he's really glad that it was the key to bringing us together again," she wrote.

She added: “Small actions can have big consequences. The kindness that Egbert and his family showed me will stay with me for a lifetime, and it continues to shape me as a person. That's the magical thing about kindness, it doesn't cost anything and it changes the world one person at a time.”

They say you never forget your first bicycle – nor, in this case, the person who gave it to you.