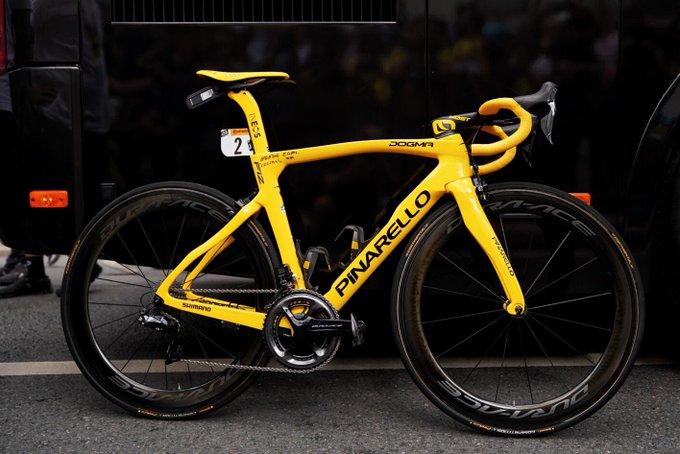 For the seventh time in eight years, Team Ineos are heading into Paris with the winner of the Tour de France – and as happened on the six previous occasions when it was known as Team Sky, it is marking the overall victory with a special paint scheme on the champion’s bike, as well as custom kit for his team mates and custom wraps on the team vehicles.

First off, here’s the Pinarello the 22-year-old is riding on the way from Rambouillet to the Champs-Elysées circuit this evening.

Bernal is in the iconic yellow jersey, of course, but his team-mates – including outgoing champion Geraint Thomas, who is second overall – have accents of the colour on their kits today.

Here's the special @TeamINEOS @CastelliCycling kit our riders will wear on the road into Paris, supporting the yellow jersey of @Eganbernal #7eamINEOS pic.twitter.com/5RlWXw7m9Q

Here are the team vehicles.

Besides the yellow jersey, Bernal also takes the white jersey as best young rider in this 106th edition of the race.

It’s not just the Team Ineos riders and their kits turning yellow in Paris this evening, either – thousands upon thousands of Colombian fans, many based in Europe, others making the trip specially from Latin America for the biggest moment in the country’s sporting history, have done likewise to the start in Rambouillet and in Paris on the Champs-Elysées, the majority dressed in the shirts of the country’s national football team.

A rockstar welcome for @Eganbernal. Incredible support for the yellow jersey, with Colombia on the brink of its first Tour winner #TDF2019 pic.twitter.com/bBvf4QRo2v

meanwhile, here’s the scene back in Bernal’s home city – to borrow a phrase from the late, great rugby commentator Bill McLaren, “They’ll be dancing on the streets of Zipaquira tonight.”