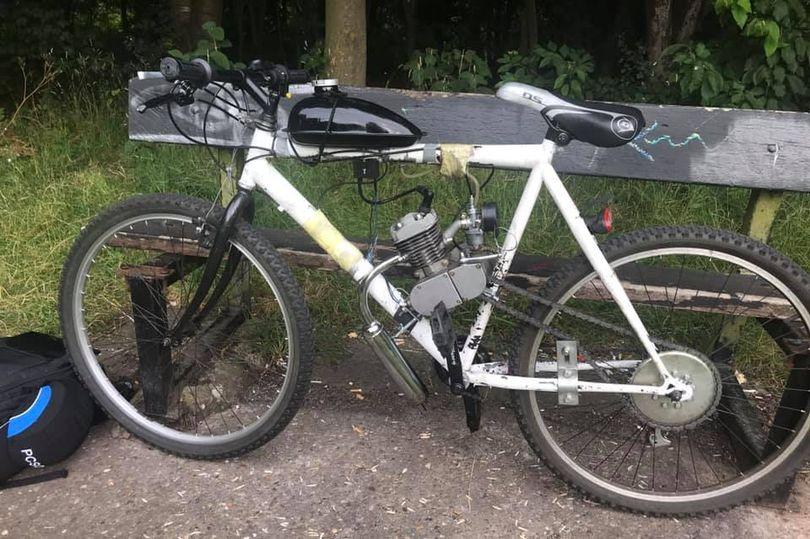 A person riding a bicycle which had been fitted with a petrol engine with its fuel tank attached to the crossbar “with string” has been issued with a warning by police in Leicester.

The cyclist was stopped on Wednesday by a Police Community Support Officer (PCSO) at the Aylestone Meadows nature reserve in the East Midlands city, reports Leicestershire Live.

The rider of a scooter that had likewise been fitted with a petrol engine as well as additional suspension and who was accompanying the cyclist was also stopped by the officer.

According to Leicestershire Live, police were patrolling the nature reserve following complaints by local residents about people using such vehicles there.

While the PCSO did not seize the bike or scooter on Wednesday, the riders were reportedly given “some words of advice.”

They were also issued with warning under section 59 of the Police Reform Act 2002, which relates to motor vehicles being driven in a manner that “is causing, or is likely to cause, alarm, distress or annoyance to members of the public.

It’s the second time this year that a cyclist riding a bike that has been retrofitted with a petrol engine has been stopped at Aylsetone Meadows, says Leicestershire Live.

In the previous incident, the bicycle, which had a two-stroke engine, was seized after it was deemed to be “unsafe,” with a PCSO also issuing a section 59 warning against its owner.