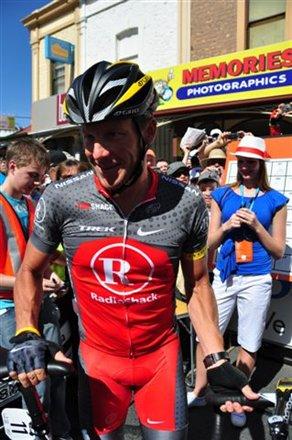 The jersey-swapping antics of Lance Armstrong’s Radio Shack team and associated tantrums by its directeur sportif at this year’s Tour de France have been punished by the UCI.

The stunt earned manager Johann Bruyneel - who also "publicly insulted" UCI officials - a fine of 10,000 Swiss Francs (CHF) equivalent to about £6350 while each team member who donned a black Livestrong jersey for the podium team presentation in Paris will be required to cough up 2,500 CHF, about £1600.

Additiionally Bruyneel was banned for two months by the UCI. a ban that will run from February 1 to March 31, 2011.

The Radio Shack team had initially tried to wear the jerseys which featured the number 28, representing the 28 million people worldwide said to be living with cancer, at the start of the final stage of this year’s Tour before officials forced them to change back into their regulation team kit.

But clearly Armstrong’s determination to make a point was not to be thwarted and the riders succeeded in wearing the black jerseys while receiving the prize for the Tour’s best team performance.

Some observers have suggested that by failing to follow procedures that would have permitted the team to wear an alternative jersey, Team Radio Shack deliberately engineered a confrontation with the UCI's Tour commissaires in order to garner additional publicity for Armstrong's Livestrong Foundation.

The UCI say they will donate the fine to the Swiss League Against Cancer.

Cycling's governing body also announced yesterday that it has banned the Spaniard Carlos Barredo from competition for two months. Barredo started a fight with Portuguese rider Rui Costa at the end of the race's sixth stage at Gueugnon over a racing incident.

Whereas Bruyneel's ban will allow him to be present with the Radio Shack team at January's Tour Down Under, Barredo's sanction from January 1 to February 28 will prevent him from joining his new Rabobank team in Australia. The UCI has not so far offered an explanation for the different timing of the bans.