Live blog: Angry letter and petition as amateur trade teams rail against UCI decision excluding them from Track World Cup; Two cyclists Chase the Sun from Thames Estuary to Bristol Channel – then ride all the way back + more 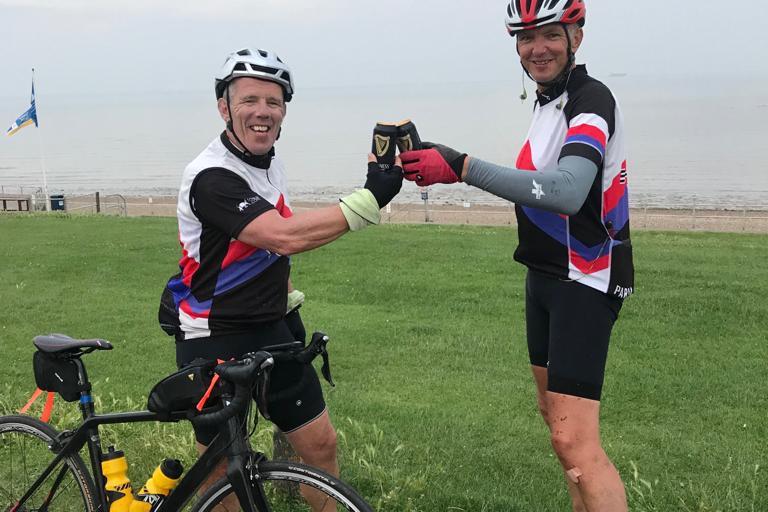 Two cyclists did Saturday's 200-mile+ Chase the Sun ride from the Thames Estuary to the Bristol Channel - then rode back!

This is a decent weekend's riding by anyone's standards - two members of Kent-based Sheppey Velo, based in the town in Kent from where the annual Chase the Sun ride starts at sunrise on the longest Saturday of the year with the aim of reaching Burnham-on-Sea in Somerset by sunset, did the ride to the Bristol Channel ... then got back on their bikes the following morning to head all the way back to the start point on the Thames Estuary.

Chapeau to Steve Evans and Sean Reid and a shout-out to anyone who completed the coast-to-coast ride, which perhaps doesn't get the same attention as some other events of a similar nature when the daylight is at its longest.

Check that elevation gain, too! 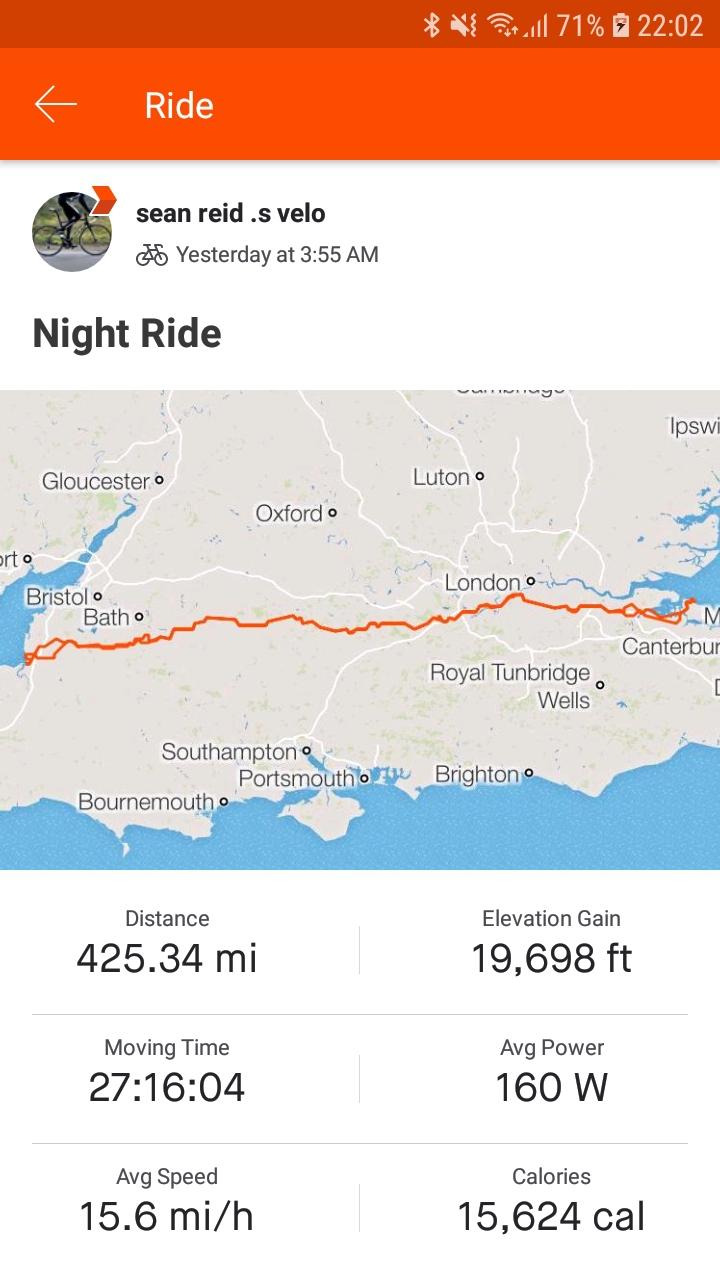 Our open letter to the @UCI_cycling, regarding the recently announced changes to track cycling. Join our fight: sign the petition and keep us on track! https://t.co/xntngWkUky pic.twitter.com/bU5nta2UG2

Joining Huub Wattbike in penning an open letter to voice their displeasure to the UCI, the team have also started a petition that's got over 300 signatures in less than an hour. You can read their letter and sign the petition here. 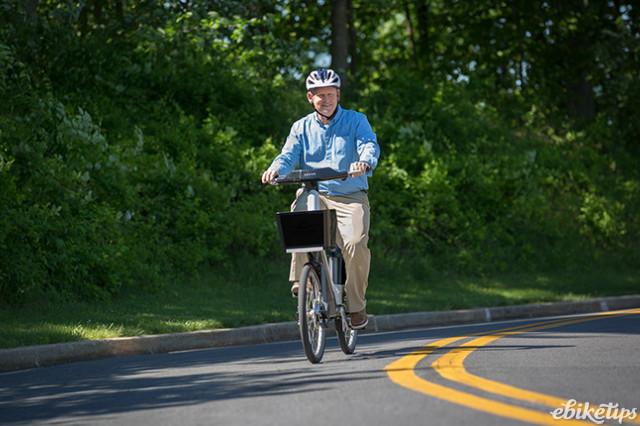 With 120 bikes in its fleet available across the town of Falkirk and beyond, Forth Bike is now the biggest electric bike share scheme in Scotland. Full story on eBikeTips.

Huub-Wattbike will no longer be able to compete in the Track Cycling World Cup, an event they won in December, thanks to the UCI's changes that excludes amateur teams from taking part.

In an lengthy open letter to UCI president David Lappartient they've now uploaded on social media, Huub Wattbike say: "As a multiple World Cup winning trade team which has broken records and developed world champions, the announced changes have sever implications for us and will ultimately kill off the existence of trade teams completely.

..."Furthermore and putting our personal situation aside, we feel the changes are brutally destructive to the sport we know and love and in this letter we want to argue why."

The team then ask for an explanation, how athletes are supposed to develop outside of the national system and how riders, employees and sponsors of trade teams will be compensated. We'll updated if we catch wind of a statement from the UCI on the matter.

James MacDonald's bid to set a new 24-hour distance record for riding in a velodrome came to grief on Sunday after he crashed on some water he had dropped on the boards of the Geraint Thomas Velodrome in Newport.

The British rider was on course to break the record of 941.873km currently held by Austria’s Christoph Strasser – who coincidentally has just won a record sixth Race Across America title.

MacDonald, 48 carried on riding for a further five hours but was behind the pace and was forced to abandon, reports Reuters.

He said: "Well 20 months of preparation pretty much ended on the back straight after slipping on the water I'd spilled earlier.

"Did try for the 1,000km record but after the savage pace of the 24 and the injuries it was all too much."

"I'd like to thank everyone who made this happen. Too many to list now. Need some rest. Thanks for all the amazing support both in Newport and online, it's been a mad mad day!"

What cyclists experience when a large vehicle passes them without proper distance/speed reduction...pic.twitter.com/ol0paLynK2

An unlikely source, but this vape cloud appears to give a pretty good idea of the turbulence felt when a big vehicle passes too close at speed.

Wrapping up @tourdesuisse_official with the best of the on-bike action from Stage 9, as we ride with the peloton through the Swiss Alps! . . . #tourdesuisse #roadcycling #procycling #cycling #uci #uciworldtour #racing #riders #lifebehindbars #bike #cyclinglife #cyclist #pedal #roadbike #bikelife #bicycle #cyclingphotos #ciclismo

Peter Sagan has a wobble while attempting to get his shades clean, with a Dimension Data rider to his left looking a tad concerned. Priorities and all...

An iconic team of the domestic circuit with some of the kindest people I’ve met. British Cycling will miss @MadisonGenesis. Thank you for all you’ve done https://t.co/UmubnHJPVn

An open letter reads: "It is with a great regret that we are announcing Madison Genesis will cease racing at the end of this season. In this open letter to everyone that has supported us over the last seven years, we want to offer an explanation and use it as an opportunity to show our gratitude to our fans and sponsors that made the dream a reality.

Who would have thought back in 2012, that an unknown team could go on to create so many incredible, lasting memories? We started out with a recently retired Roger Hammond at the helm in 2012 and achieved everything we wanted and more. With too many highlights to mention, a nod must be given to winning the Tour Series in 2015 and of course helping Connor Swift to his National Road Race title in July last year.

The team will continue to race until the end of the season, with a main goal very much being to ride at and be a force at the Tour of Britain in September. There will be plenty more opportunities to see Madison Genesis this year, not least of all the team ride out in Wales next month.

As a team, we would just like to take this opportunity to thank everyone for helping to make the last seven years truly unforgettable. Fans, riders, sponsors, mechanics, soigneurs, helpers, journalists, photographers, videographers and anyone in between, thank you for joining us on our journey.

See you on the road.

Lachlan Morton is first to finish Stage 1. After 630km and 10,900m of climbing on everything from road to singletrack and the odd hikeabike it's time for some downtime at CP1. Angus Young @angusyoung139 is second on the road, not far off finishing the stage now. Watch the dots, link in bio. #GBDURO19 #noprizesnosupport @cadence_images

The inaugural GBDURO is ran by The Racing Collective, and involves four totally unsupported stages in which riders have to go on and off-road over some punishing terrain, with over 10,000m of climbing on stage 1. Lachlan Morton of the EF Education pro team was the first to finished the 630km opening stage, forgoing a rest stop in Bristol after the first day and doing the whole 630km in one go. Here are the four stages:

The route is newly developed and is known as the GBDIVIDE, created by a number of well-known stalwarts in the bikepacking community. There are no prizes as such, with the rider finishing the four stages in the lowest aggregate time receiving nothing more than some major kudos. Riders have to finish by 2nd July, meaning all competitors will need to ride over 200km a day to make it to the finisher's party. You can follow the progress of all riders on the Dotwatcher website here, and find out more about GBDURO 2019 on the Racing Collective website. 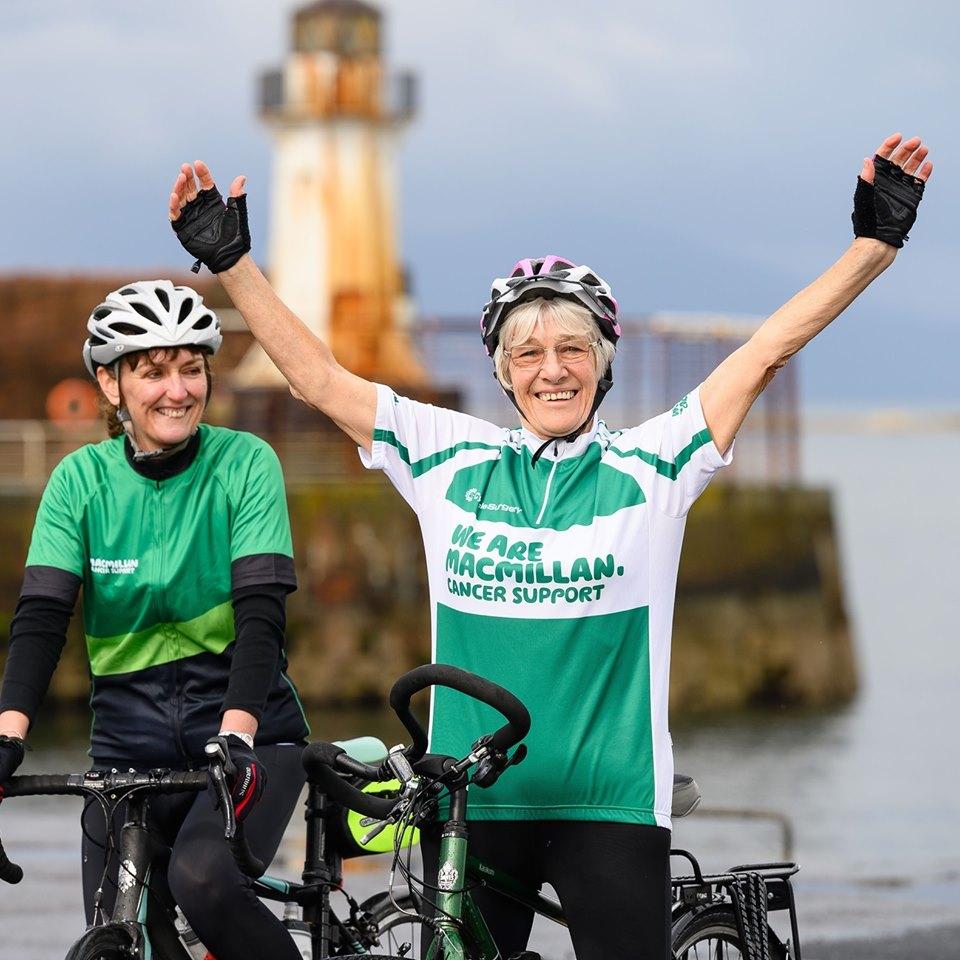 If you haven't been following cycling-related matters over the weekend, here's some things you may have missed...

Team sport players’ training sees them get the benefits of both endurance and power athletes, finds study

Robert Hazeldean crowdfunding hits goal – but will it be enough?

1
Cycling UK complains to Sunday Times over Rod Liddle’s “piano wire at neck height” column – published on weekend a cyclist was hospitalised by riding into such a trap
2
Sunday Times says Rod Liddle “piano wire” column “not intended to be taken seriously”
3
Fractured spine for Yorkshire cyclist after hit-and-run motorist ‘deliberately’ drove at riders
4
Decathlon launch a new entry-level gravel bike, the Triban RC 120
5
“A small, almost nothing, story” – Mark Cavendish hits back at report he may miss Tour de France
6
What do the new lockdown ‘groups of 6’ rules mean for cyclists?
7
Near Miss of the Day 416: HGV driver powers past cyclist despite oncoming van – police take very swift action
8
Police retrieved "five pieces of fingers" from the Humber Bridge after a cyclist fell off his bike