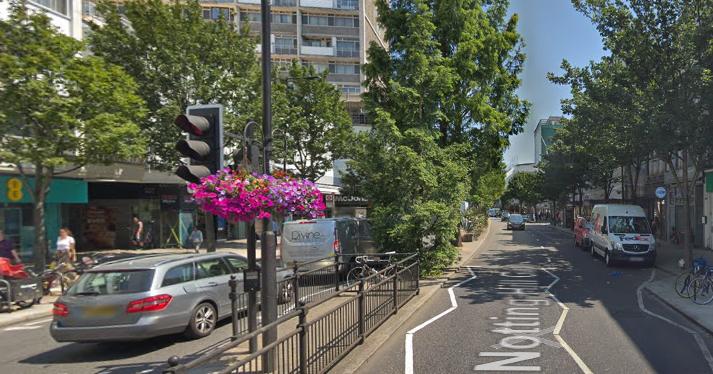 Kate Cairns, whose sister Eilidh was killed in Notting Hill in 2009, says no such relative exists
by Simon_MacMichael

A woman who spoke out against a cycleway from Holland Park Avenue to Notting Hill Gate at a public meeting last week falsely claimed to be the aunt of cyclist Eilidh Cairns, who was killed on the same route in 2009 as she rode her bike to work.

According to Eilidh’s sister Kate Cairns, the woman told the meeting at Kensington & Chelsea Town Hall that Eilidh would have opposed the scheme – one that Ms Cairns, who said there was no such relative, pointed out on Twitter “would have saved her life.”

Also includes fake “auntie” of dead Eilidh Cairns who claimed at the public meeting: had Eilidh been alive she would not have supported the segregated route (that would have saved her life). #noshame @willnorman @theJeremyVine @kayaburgess @RossLydall @citycyclists @cycleoptic

Ms Cairns, who after her sister’s death founded the charity See Me Save Me, told the London Evening Standard’s Ross Lydall that the Royal Borough of Kensington & Chelsea’s decision, announced at Thursday evening’s meeting, that it was withdrawing its support for the cycleway, was “unforgiveable.”

She told the newspaper: “I’m absolutely outraged that the local council does not have the vision to protect its residents, tourists and everyone passing through Notting Hill Gate.

“I just find that extraordinary, really narrow-minded and completely unforgiveable for Eilidh’s death and all these crashes not to be enough for them to take action.”

Transport for London’s consultation on the cycleway, which was due to run from Wood Lane to Notting Hill Gate, closed last night. The section of the route running through Kensington & Chelsea are on roads controlled by the borough and the withdrawal of its support effectively vetoes that part of the scheme.

The council said it had taken its action, before the consultation closed, after receiving 450 emails from local residents who claimed the cycleway would cause increased congestion and air pollution and who were also opposed to the removal of two mature London plane trees and a couple of dozen smaller trees.

As a result, only the western part of the route running from Wood Lane – where it will link to a cycleway currently under construction along the A40 to Acton – to Shepherd’s Bush will be built.

There will be no protected cycle route eastwards from there until Lancaster Gate, where the East-West Cycle Superhighway starts.

There is a similar scenario further south in the borough, where the planned cycleway running from Brentford towards the city centre will terminate abruptly at Kensington Olympia where at the border of Hammersmith & Fulham with Kensington & Chelsea.

In a statement sent to the Standard, Ms Cairns said:

People are uneasy about change so I understand objections to this scheme. But there is unequivocal evidence showing that cycling increases health and well-being for all (not just those who cycle) by reducing congestion, pollution and improving the environment for pedestrians. Not only that, research shows cycling boosts business and increases local spend significantly, by up to seven times of those travelling by car. As a Chartered Civil Engineer and Chartered Environmentalist, I have written and reviewed many published papers on this issue. As the founder of the See Me Save Me campaign I have advocated for safer streets for over a decade, responding to government consultations and instigating a change to European law on HGV cab design to reduce ‘blind spots’.

It is disappointing, shocking and irresponsible that LBKC has withdrawn support for a scheme which, had it been in place, would surely have prevented the death of my sister, Eilidh Cairns, who was run down from behind by a fully laden tipper lorry 10 years ago in the middle of Notting Hill Gate whilst cycling to work. She was dragged and crushed in front of traumatised school children, commuters and local shop workers. Is not her death, and a further 275 collisions on this stretch, not enough avoidable destruction for the council to take action? Have our elected politicians not learned to take decisions on evidence rather than play political games?

The London Mayor Boris Johnson & LBKC gave permission to erect a permanent ghost [bike] at the spot of Eilidh’s death, to acknowledge the danger and remind others to take care. Every time I go to clean the bike and lay flowers local people come to speak to me, they tell me they remember that terrible day, and ask if I knew the young girl lay fully conscious, pinned under the wheel of the lorry. It astounds me that 10 years later this still affects the local community, those who did not even know her. I would like the ghost bike stripped, re-sprayed and re-erected in a prominent position in any new scheme. It is a stark, elegant and arresting reminder of the death and injury which creates immeasurable ripples across communities and society when we fail to take action.”