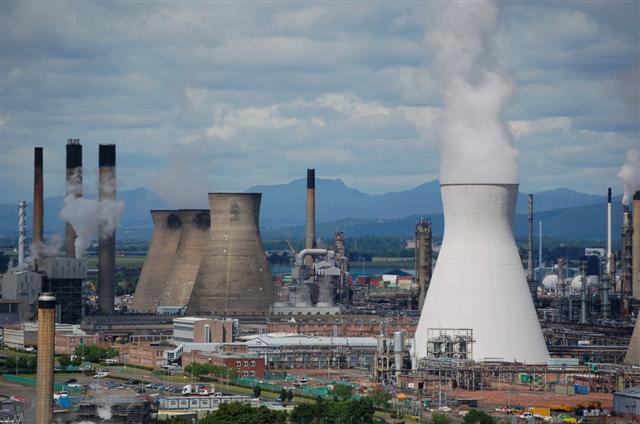 Petrochemicals giant that took over Team Sky thought responsible for a tenth of country's greenhouse gas emissions...
by Simon_MacMichael

Ineos, which last month took over Team Sky, has been named Scotland’s biggest polluter. The news follows protests by cyclists earlier this month against the firm’s plans to close a road at its sprawling site at Grangemouth, near Falkirk.

The Daily Record reports that companies owned by Ineos – which last month took over Team Sky, a move that environmental campaigners have described as ‘greenwashing’ – are responsible for a third of the greenhouse gas emissions produced by firms in Scotland with a statutory duty to report them.

Petroineos, which operates the oil refinery at Grangemouth, accounted for 1.6 million tons alone.

Green MSP Mark Ruskell said: “Ineos is Scotland’s biggest polluter and there is no way we can tackle the climate emergency without an enormous effort and investment on their part.

“I hope that Ineos will quickly wake up to the challenge.”

An Ineos spokesperson commented: “The Petroineos crude oil refinery is the only one in Scotland and produces most of the fuel used across the nation. If the nine million tonnes per year of fuels were not produced in Scotland, they would need to be shipped in from elsewhere around the world at considerable environmental impact, and financial cost to road transport users in Scotland.

“The manufacture of petrochemicals that are vital to our everyday lives, and converting crude oil into fuels that heat our homes, deliver goods and services and keeps Scotland on the move are both very energy intensive processes.”

Team Ineos was officially launched last month at the Tour de Yorkshire where it was met with protests from anti-fracking campaigners, who also highlighted the irony of the UCI WorldTour outfit, which as Team Sky had ridden the 2018 Tour de France in a one-off Sky Ocean Rescue kit, now being sponsored by one of the world’s biggest producers of plastics.

Meanwhile, earlier this month, cyclists rode around Ineos’s Scottish headquarters in Grangemouth, protesting against plans to close a section of Bo’ness Road.

The company claims that the road closure will improve security and safety as well as encouraging more companies to base themselves there, reports the Falkirk Herald.

However, a spokesperson for Friends of Bo’ness Road Action Group (BRAG) said that the road was a much-needed link for local people and that  “Ineos has exploited an unbalanced Scottish planning system that clearly favours business, flexing its significant wealth and influence, over the wishes of communities impacted by major developments.

”Bo’ness Road is the main connecting route between Bo’ness and Grangemouth for local people, local businesses and emergency services. However, over the years the road has encountered a gradual build up to either side by various bits of the petro-chemical plant currently owned by Ineos.

”BRAG worked hard to gather the views of the community against the closure, gained the support of community councils and Falkirk Council itself, and submitted a huge petition against the road closure.

“The campaign was reflected in the recommendations which the Planning Reporter put forward to refuse the application.

“Then, against all democratic processes and views, including his own civil servants, Kevin Stewart, the minister for Local Government, Housing and Planning pulled it in to decide in favour of the closure.”