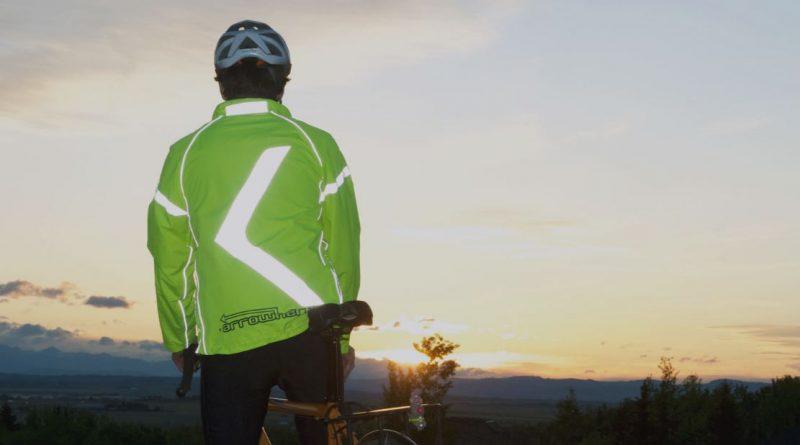 Researchers in Canada have said that cyclists who wear high-visibility vests with an arrow pointing to the left results in motorists giving them more space when overtaking.

Academics at the University of British Columbia’s department of engineering gave cyclists participating in their study hi-vis vests from the brand ArroWhere with different designs, while some riders taking part did so without a vest.

They wanted to establish the role communication played in cycle safety and whether it was of greater importance than visual aids such as lights.

Publishing their findings in the journal Sustainability, associate professor Gordon Lovegrove and co-author Takuro Shoji said that a hi-vis vest with an arrow pointing left [in the UK, the equivalent would be an arrow pointing right] was most effective.

One of the reasons the study – claimed to be the first that examines how communication can help protect cyclists – was undertaken was to examine whether “be safe, be seen” style road safety campaigns worked.

Highlighting that the limited sample size meant the results should be treated with caution, the study said that they did suggest “that bicycle safety vests that provide for both conspicuity and communication appear to show promise.”

The authors continued: “’Be Safe, Be Seen’ is an important message, but is often interpreted as ‘The more you are seen, the better’. Some take this message too far and end up creating dangerous situations for themselves and others. For example, purchasing a bicycle light with 1000 lumens of power (car headlights average 700 lumens), aiming it at eye level, and putting it on strobe mode to ‘be seen’ is dangerous. It disorients oncoming drivers and cyclists and will increase the chances of accidents.

“The best chance for VRUs to enhance their own safety is to apply to themselves a message relevant to approaching motorists, visible but simple, and can be immediately understood in its meaning and applied functions. Of course, this ‘solution’ must also be practical and affordable for those using it. Current equipment and apparel with retroreflective material addresses visibility, affordability, and practicality, but does not convey a relevant message.

“The best possible message for a motorist to encounter on the road is one resembling a familiar road sign with universal symbols,” they added, saying that ArroWhere, which is based in Canada, “utilises the psychology of road signs and applies it to VRUs in attempts to enhance their safety on the road by considering both cyclist and motorist positions together.”