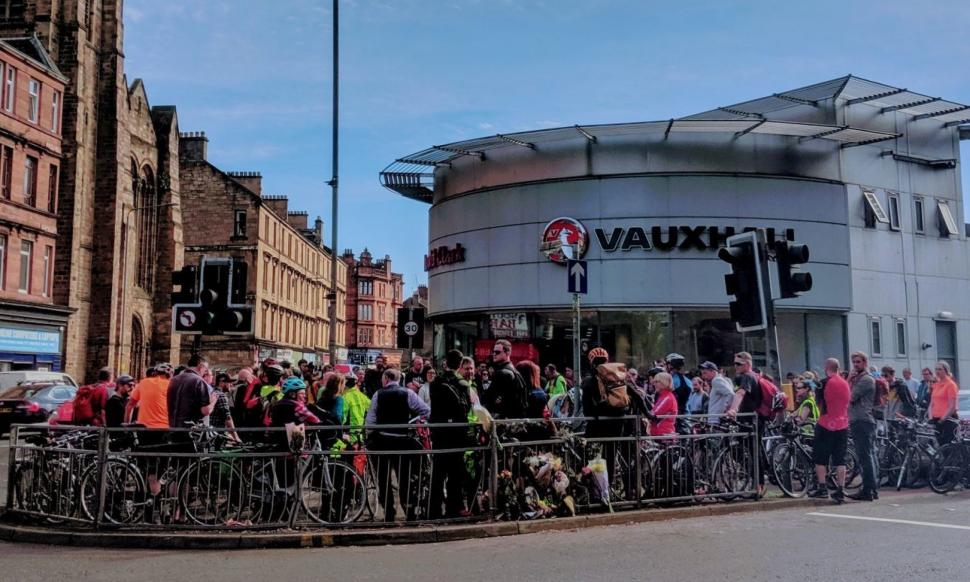 Cyclists in Glasgow have held a vigil in memory of a rider killed in a collision with a lorry last Wednesday, with campaigners calling on city authorities and the Scottish Government to prioritise safe, protected infrastructure

The fatal collision happened on Nithsdale Drive close to the junction with Pollokshaws Road at 9.15am on Wednesday morning, with a female cyclist losing her life.

The lorry involved is reported to have been in the livery of builders’ merchants Jewson, and Police Scotland, who are continuing their investigation, have appealed for witnesses.

The vigil was organised by Strathclyde cycling campaign group GoBike, whose co-convenor, Iona Shepherd, told The National: “We are really desperate for this never to happen again.

“Every day, people who cycle on the roads encounter danger. We need protected spaces and it’s something that we’ve been asking for, for such a long time.

“Often lanes are so short and unless you happen to live on one, you will have to be on the road at the moment,” she added.

“We want better designed roads and for strong political will to push this faster.”

In a post on its website, the campaign group said: “People cycling in Glasgow experience danger on the roads on a daily basis.

“Our cycling infrastructure is currently few and far between, with much of it below standard.

“There needs to be far stronger political will to push projects through faster. All of which should be backed up with better design standards.”

The fatal collision marks the fourth death of a cyclist on the country’s roads so far this year, compared to five in the whole of 2018, and GoBike called for protected infrastructure to ensure such incidents “never happen again.”

It said: “There is a need and a demand to provide safe segregate cycle infrastructure that will enable everyone who wants to cycle in Glasgow the opportunity to do so safely.

“GoBike will continue to work to push for this, so that tragedies, as happened on Wednesday, never happen again.”

Their appeal was echoed by Andy Mulholland, head of design and engineering at Sustrans Scotland, who told The National: “Any accident or injury is one too many.

“But this incident brings into sharp focus the need to redouble our efforts to improve safety for people walking and cycling in our towns and cities.

“The best way to improve safety for cyclists is to have safe, continuous, segregated cycling infrastructure for all.”

Among those attending the vigil was James Bonner, who regularly rides along the road where the cyclist was killed.

He told the newspaper: “I work in sustainability, I advocate cycling. Our government tells us to go out and cycle and yet these incidents happen.

“It feels difficult sometimes to promote it – if I inspire something to cycle through a blog, or through advice I’ve given, and that puts them in a position of danger that leaves a real emotional contradiction in you.

“Should I leave the bike at home? Should I tell my sister, my mother, my friend to cycle? Because this is potentially the impact,” he added.