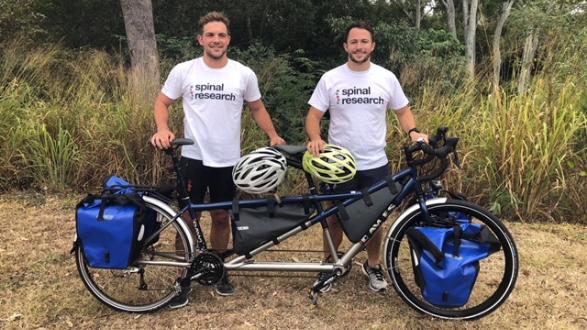 Two British doctors now based in Australia have described how they encountered a bear in Siberia and were robbed at knifepoint in Mongolia during a nine-month journey to set a new Guinness World Record for the fastest circumnavigation of the world by tandem.

It took Lloyd Collier and Louis Snellgrove, who work as emergency doctors in Townsville, Queensland, 283 days to complete their circumnavigation, returning to their starting point in Adelaide, South Australia last Thursday, reports 10daily.com.au.

That beat the existing round-the-world record by seven days, subject to verification by Guinness World Records, with the pair covering 29,000 kilometres and travelling through 24 countries, with Collier saying, “It sounds mental, doesn’t it?”

He and Snellgrove were raising money for neurological research, with Collier’s uncle left paralysed after an incident at his work.

Speaking about coming across the bear in close to Lake Baikal in Siberia, he said: "Honestly, it was easily one of the best and worst, scariest moments of my life.

"We came to a halt about 10 metres in front of it and he stares at us and we stare at him, and it felt like four hours but it was more like four seconds, and we just completely froze."

Fortunately, the animal, which they had spotted when it reared up onto its hind legs, soon retreated back into the trees.

"We were so scared after we saw it we didn't have the courage to pitch up our tent, we slept in the Trans-Siberian railway station,” he continued.

“We told the guard and he didn't show any emotion at all. It was like 'you're cycling through Siberia at dusk, of course, you saw a bear'."

He also spoke of how a passing motorist robbed the pair at knifepoint as they were pitching their tents last September in the Gobi Desert in Mongolia.

"I was standing nearest him and he started thrusting the knife at me to show me what he'd do if we didn't give him any money,” he said.

They handed over small-denomination notes and decided to carry on their journey rather than stopping as planned in case the thief decided to return.

"It was probably the worst 24 hours of the trip. It's moments like that I thought about my uncle and what he went through," Collier went on.

"Uncle Alun was put in a wheelchair when he was 29, which is how old I am now.

“I watched this man who I adored achieving more whilst in a wheelchair than most full-bodied people achieve in a lifetime and it had a massive impact on me." he added.

"This was easily the toughest thing I've ever had to do but it's nothing compared to being told at the age of 29 that you'll never walk again," Collier said.

The pair have been blogging about their journey on their World Tandem website, and have so far raised almost A$35,000 (£19,000) for the Brain Foundation in Australia and the UK charity Spinal Research.