From Dumfries to Inverness and Glasgow to Aberdeen, cyclists have been sending a message to councils this weekend
by Simon_MacMichael

Cyclists the length and breadth of Scotland have this weekend been participating in the eighth national Pedal on Parliament, with imaginative and inspirational ‘Pop-Up’ protests taking place from Dumfries to Inverness and Glasgow to Aberdeen.

While the previous seven editions of the campaigning event, first held in 2012, have included a mass ride in Edinburgh that finishes outside the Scottish Parliament Building in Edinburgh, this year the focus has been on campaigning at local level.

From Friday until Sunday, grassroots campaigners highlighted local barriers to cycling in a co-ordinated weekend of action spanning the country, taking such diverse forms as people protected bike lanes, bike buses for schoolchildren, a search – with the aid of Jelly Babies – for “Edinburgh’s most ridiculous bike lane, fancy dress protests and even a ‘chicane challenge’ in the capital.

Here’s some examples of what has being going on across Scotland this weekend, with descriptions provided by Pedal on Parliament.

In Stirling, campaigners coned off a cycle lane that is often ignored by drivers – and cheekily installed the 'no parking' notices that the council ought to have put up almost 14 years ago. Elsewhere in Glasgow, the GoBike Board of shame revealed its latest location on Kilmarnock Road beside a notorious narrow cycle lane painted in the door zone. The board read “Roll Up! Roll Up! For Glasgow City Council’s FREE ride of danger rollercoaster THE DOOR ZONE!! Ride in it and get whacked! Ride out of it and get smacked! No height restrictions apply! Mind how you go!”

In Edinburgh things took a more surreal turn, with one campaigner fed up of dangerously narrow cycle lanes, taking his "Jelly Baby Warriors Stick" to the streets to measure the width of some of the cities more terrifyingly narrow lanes – some even with streams of traffic on both sides. With 1.5 metres (50 Jelly Babies) being the minimum safe distance for overtaking a bike, narrower lanes have been found to encourage dangerously close passes. After a call out for Edinburgh's worst bike lanes,. 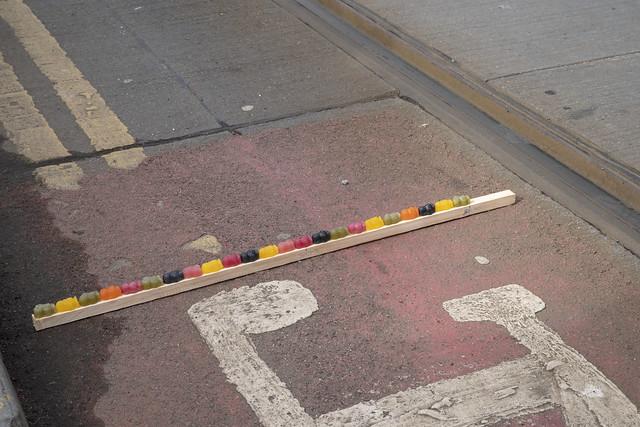 Elsewhere in Edinburgh, a caravan of cargo bikes, tandems, trailers and other non-standard machines took on the Chicane Challenge. Attempting to navigate the barriers on NCN1, protesters demonstrated that this safe route can actually be impossible for some of the more vulnerable cyclists to use. In East Dunbartonshire campaigners gathered with stuffed bears to complete the Bears Way which was controversially stopped before more than a mile had been built. Since then, at least one cyclist has been injured in a collision on a section that ought to have been separated from traffic had the route been built in full.

In Scotstoun in Glasgow, local father Andy Watson organised a protest and launched a petition to ask the council for a safe route to Victoria Park. Families, assembled with signs calling for safer crossings, attempted to re-enact the famous Beatles Abbey Road album cover but, without a real zebra crossing, it was too dangerous to attempt. 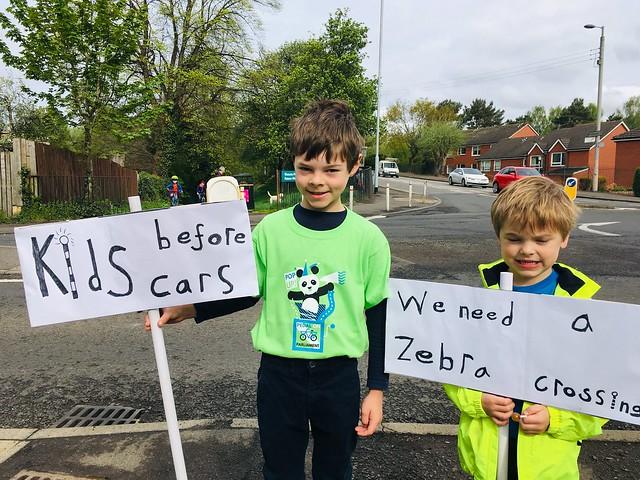 Elsewhere in Glasgow, the GoBike Board of Shame made its second appearance of the weekend - outside the University of Glasgow who, along with Glasgow City Council, have recently been slammed by cycling advocates for failing to include safe cycling provision in their redevelopment of University Avenue.

In Cambuslang, guerilla action turned a painted bike lane into what is thought to be the world's first 'Hoover-protected cycle track' in recognition of the town's industrial past. Toy Hoovers formed a temporary barrier between cyclists and motorised traffic, showing how easily safer cycling could be achieved.

In Dumfries, local cycle campaign group Cycling Dumfries were also calling for safer crossings - by dressing up as cows to protest the absurdity that dairy farms get signalised crossings on the A75 while people on foot and on bikes often have to wait for a gap in the traffic or are fenced in on narrow traffic islands while waiting to cross.

Meanwhile, in Aberdeen {below) and Dundee, mass rides were taking over parts of the cities where traffic dominates all too often. Ahead of the weekend of action, Pedal on Parliament organiser Sally Hinchcliffe said: “This year we want to take the battle to local authorities to highlight the sort of issues our supporters face every day in just trying to get about by bike.

“While the Scottish Government has started to increase investment in active travel, many local authorities are falling behind and whether you can cycle safely or not is becoming a postcode lottery.

“With climate change now becoming an urgent issue, we need to change the way we travel, and that means changes to enable cycling everywhere, with safe cycle routes away from cars.”

Pop-up coordinator Iona Shepherd commented: "When we put out a call for creative protests we were hopeful we might get a few good ideas – but we’ve been blown away by the response, with 20 events planned across the country.

“It’s not just established campaign groups that are taking part but individuals - parents and commuters who just want to be able to cycle safely with their families and get home from work alive."

Full details of all this weekend’s protests can be found on the Pedal on Parliament website.