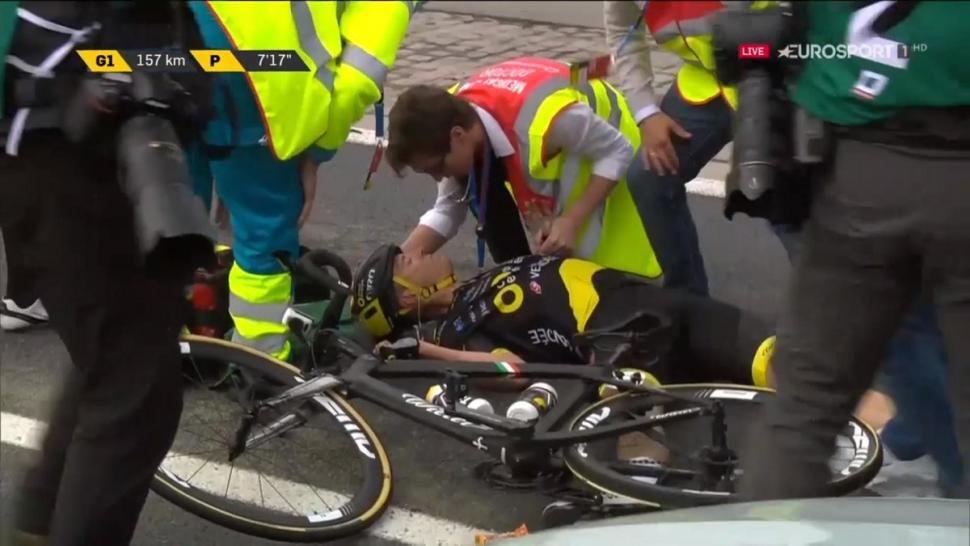 Niki Terpstra, winner of last year’s Tour of Flanders, has said he’ll “be back” after his title defence ended today when he was knocked unconscious in a crash.

The crash happened on a straight, flat stretch of road with 100 kilometres ridden of the 267 kilometre race from Antwerp to Oudenarde, the most likely cause being a touch of wheels.

TV footage showed the Direct-Energie rider motionless on the ground while he was attended to by race medical staff, with team mates looking concerned.

The French UCI Professional Continental outfit subsequently gave an update via Twitter, with the team doctor confirming that the Dutch rider was okay.

However the team added that as a result of his suffering a cranial trauma and being knocked unconscious, he would be unable to ride next week at Paris-Roubaix – a race he won in 2014, and where he finished third 12 months ago.

The 34-year-old subsequently reassured fans via Instagram that he would “be back.”

. @NikiTerpstra on his Instagram Story @RondeVlaanderen "I'll be back" pic.twitter.com/jFRgKotxCI

Direct Energie, which Terpstra joined this season after eight years at Quick Step, was last month given a wild card entry to July’s Tour de France.

Today's race was won by the Italian rider Alberto Bettiol of EF Educatin First, in what was the first professional victory of his career.