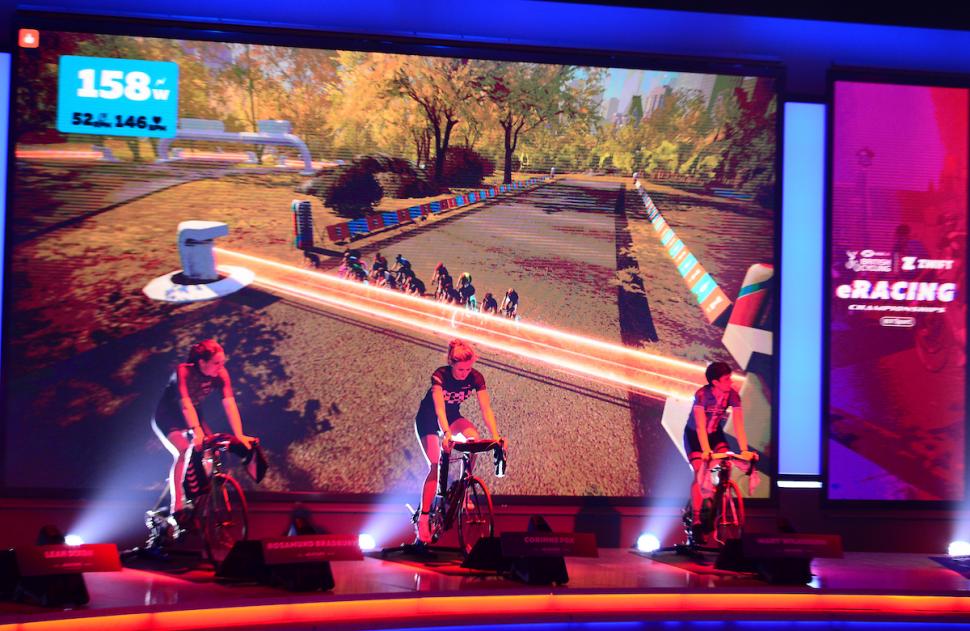 The inaugural British national eRacing champions have been reflecting on their victories yesterday at the BT Sports studios at London’s Queen Elizabeth Olympic Park, where both saw off nine other riders over three events to claim the national jerseys that they will be entitled to sport on Zwift over the next 12 months.

The virtual racing platform partnered with British Cycling to stage the  world-first event, with the first two events – the elimination race and the points race – streamed online in the afternoon and BT Sport broadcasting the decisive scratch race in the evening.

Former GB rower Rosamund Bradbury took victory in the women’s event, while the men’s title went to Cameron Jeffers, who saw off the challenge of no fewer than four riders from UCI Continental team Madison-Genesis.

Bradbury said afterwards: “I’m feeling great now! It was pretty hard in that final race, it was so tactical.

“I got a good power up for the sprinting really early on, so I had to decide whether to use it and hope I’d get another one later or save it. And I went to save it and I’m glad I did. It really helped for the final sprint.

“At the beginning of today, I didn’t know what to expect. I could see I was quite strong on the sprints.

“But this last race, there were hills. And I’m obviously one of the bigger riders and don’t have the advantage. But my rowing experience has really helped me. I’ve still got the power I used to.”

Jeffers, meanwhile, entered the men’s Wahoo Scratch Race with a 13-point advantage after finishing second in the elimination race to Madison Genesis rider Tom Moses before winning the points race.

He was beaten to the line by James Phillips in the final race, but had done enough to clinch the overall title from the Canyon ZCC rider, with Moses completing the podium.

“It’s all a little bit surreal really,” Jeffers said afterwards. “I finished 12th in the qualifiers, then due to two guys dropping out of the finals I managed to promote myself to 10th and got a position in today’s finals.

“I came to this race knowing that Madison Genesis had four guys in the line-up and in terms of out and out power numbers they were probably the strongest guys here.

“I knew I didn’t necessarily have the numbers, but the advantage that I could get over the four guys is course knowledge and knowing where to put the power down and where to attack.

“I’ve done a lot of course research, a lot of riding and racing on Zwift, and researching the different power ups,” he added. “So, all of that put together, I managed to pull off the win.”