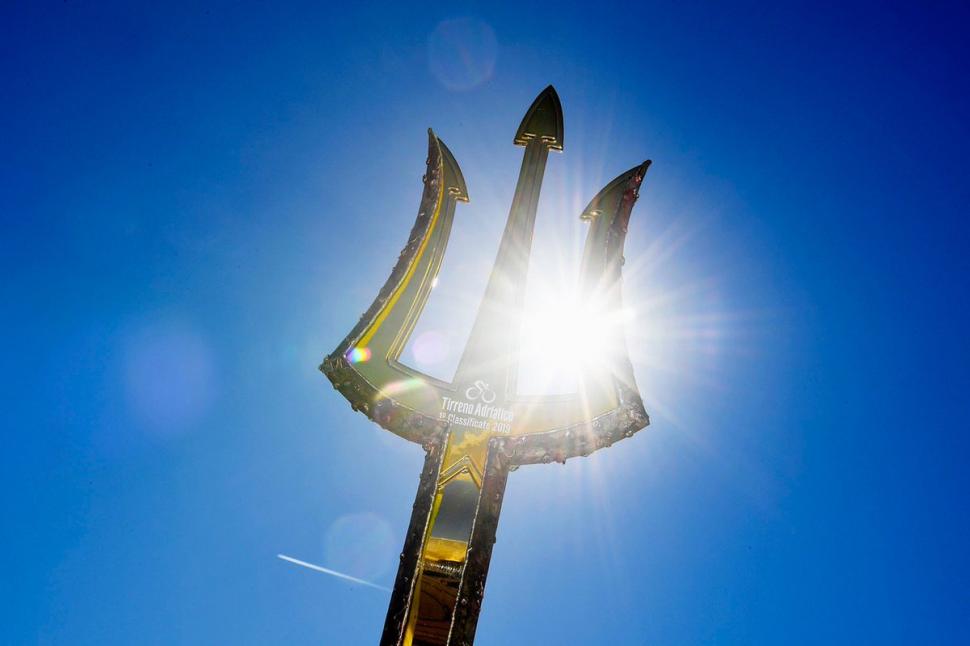 Tirreno Adriatico trophy (via Twitter)
19 March 2019, 19:27
Adam Yates misses out on Tirreno win by less than a second

Adam Yates has missed out on becoming the first British winner of Tirrreno-Adriatico by less than a second.

The Slovenian former ski jumper, silver medallist in the time trial at the road world championships at Bergen in 2017, was widely tipped to overhaul the deficit today.

But he cut it fine, winning the week-long Italian race by just 0.31 of a second, with Yates finishing second overall and Astana’s Jakob Fuglsang half a minute back in third place. Selected postal workers across London, Cambridge and Birmingham were today supplied with specially-designed e-trikes with a huge load capacity to deliver their mail. More over on eBiketips.

On the invaluable comments section of the Bike Blog, a reader has a plausible answer to why Prof Robert Winston seems to dislike cyclists so much. pic.twitter.com/XpQPUtGYbT

The prof hasn't exactly been glowing in his thoughts on cyclists as of late, calling for bike commuters to be taxed and insured - but if this comment from a Guardian thread is true, maybe he's just really got a bee in his bonnet about this incident last year... 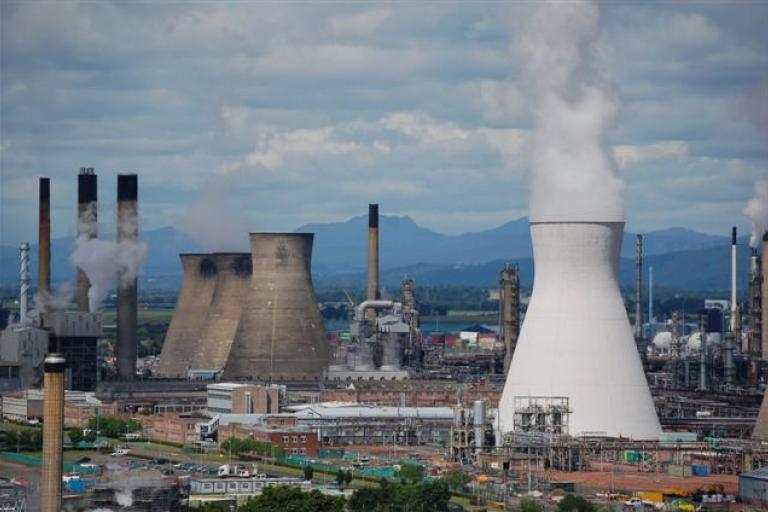 Ahead of today’s expected announcement that Ineos will sponsor Team Sky from next year, the petrochemicals business and its founder and controlling shareholder Sir Jim Ratcliffe have been accused of a “blatant attempt at greenwashing” by environmental campaigners.

At last year’s Tour de France, the team’s jerseys promoted the Sky Ocean Rescue campaign, which aims to clear plastic pollution from the seas, and when the broadcaster announced last December that it was ending its sponsorship after this season, one of the reasons given was that it wanted focus on that initiative.

In recent days as it has become clear that the Ineos deal is all but finalised, it hasn’t gone unnoticed on social media that the new sponsor, Britain’s biggest private company, is a major manufacturer of plastics.

Today, Tony Bosworth, fossil free campaigner at Friends of the Earth, said: “Taking over Team Sky is the latest blatant attempt at greenwashing by Ineos.

“It’s a harsh change of tone that may see Sky’s Ocean Rescue campaign to clear plastic pollution from our oceans ditched from the team jersey in favour of Ineos – one of the biggest plastic producers in Europe.

"This is also a company that wants to frack large swathes of northern England and the East Midlands. Ineos has also been lobbying hard for the government to relax safety rules so fracking companies can trigger larger earthquakes before having to down tools,” he added.

“Cycling is one the UK’s most successful and popular sports, but do the likes of Geraint Thomas and Chris Froome really want to be associated with a planet-wrecking company like Ineos?”

19 March 2019, 11:44
Shop assistant thinks he's offering helpful advice to woman on switching to clipless pedals... who happens to be an Olympian

Went to the bike shop to get new cage pedals for my commuter (have broken off enough chunks that they're just spindles, so mostly used up) and Shop Dude said, "Clipless is better."
1. I don't actually think that's always true for everyone, and
2. Thanks, buddy. I'll check it out.

We may have a tad bit of sympathy for the shop assistant who obviously wasn't to know. As is evident from Mara Abbott's further replies on the Twitter thread, he was taken down a peg or ten when she explained that she knew quite a bit about clipless pedals already...

"Hey, I need a new pair of pedals with cages"
"Well, first, clipless are better..."
"Thank you. I went to the Olympics for bike racing so I've got that and these are for my commuter."

We're not totally sure if this was a mechanical or not at the Tirreno Adriatico that started the madness that eventually followed...

Although you won't have to cross the bridge of death or defeat a Black Knight by severing all his limbs to get to one, as we understand it you will have to hold on until at least summer to receive the new model of the Canyon Grail with a standard drop bar (the carbon model shown in our hilarious pic above has the 'hoverbar') in some sizes. off.road.cc reviewed the 105 version recently and you're looking at mid-July to get one in size small or bigger, and the £1,449 SRAM Rival bike isn't shipping until October in medium-sized frames. Good things come to those who wait and all that... 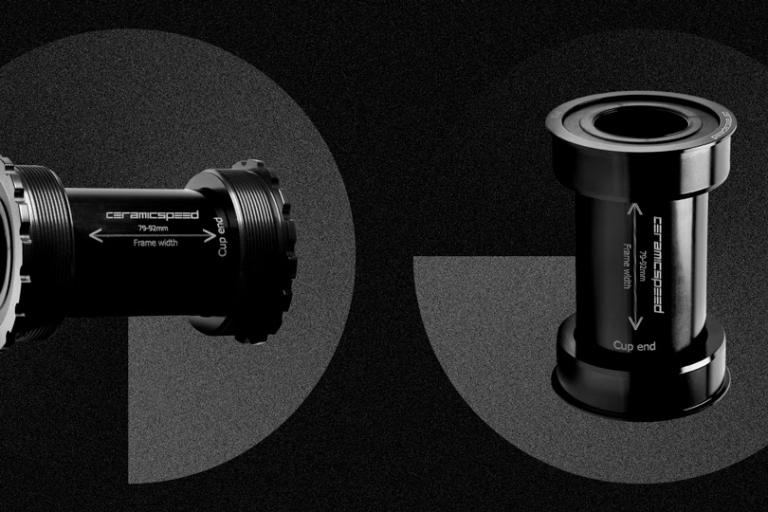 CeramicSpeed launch SRAM DUB-compatible bottom bracket series for road and off-road, and you might have to save up...

If the price of the new SRAM AXS 12 speed groupset isn't enough for you, luckily you can now accessorise it with CeramicSpeed's £332 SRAM DUB-compatible bottom bracket. It's built on a 28.99mm spindle which CeramicSpeed say allows for a more contamination-resistant design while retaining the efficiency the brand's bearings are renowned for. There are also options for Italian threaded BB's, which will please rich Pinarello owners. Head over to CeramicSpeed's website for buying options after you've remortgaged.

Having a little play around on my rollers. Won’t be long until I take on @santini_stelvio for @worldbicyclerelief ....if you want to donate there is a link in my bio.... I’m going to see if I can raise £4000...Ruby X #cycling #powerofbicycles #stelvio

You may recognise Ruby from various videos on social media in which we've seen her flipping panackes on rollers, shooting basketball hoops on rollers and just being generally impressive... well now she's taking to the road to raise money for World Bicycle Relief. Ruby will ride the iconic Stelvio climb as part of the Granfondo Stelvio event on May 31st, and is aming to raise enough money to buy at least ten Buffalo bikes (durable steel bikes with lots of load-carrying ability) for people in some of the world's poorest areas. Each bike costs around £95. If you want to donate, the JustGiving page link is here. You can also follow Ruby on Instagram to chart her progress and see more badass roller tricks.

The Wabash is a ground-up design effort from Yamaha, and looks to be US-only at the moment. More on this later via eBikeTips.

19 March 2019, 08:28
Serious crash in Northolt, Ealing as cyclist and car involved in collision

The crash happened evening and the cyclist is believed to be in his 60's. It's been reported that the cyclist has possible life-threatening injuries, but there have been no further updates as to his condition this morning. No arrests have been made.