The most expensive bike we could find, plus handmade steel and 70s disco paint
by dave atkinson

We've just been working through our pics from the Cycle Show and we've added another gallery of shots for you to have a look through. Too many shiny things to talk about them all, but let's have a quick look through some of the other brands we saw and what they were presenting at Earls Court.

If you want to see all the images from the cycle show in one place, you can get your fill by pointing your browser at /image-tag/cycle-show-2010 - there's about 400 on there, and more to come! 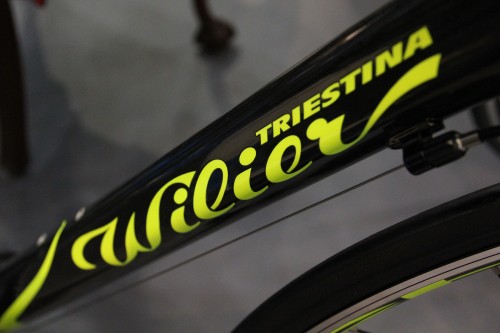 We're always happy to spend time on the Wilier stand because the Gran Turismo is one of the best looking bikes there is right now: purposeful and cool, a bit angular but still very shapely. Anyway, enough drooling. It's available now and we've already got our names down for a go on one. If you want to know more about it, there's a news piece on road.cc already.

The XP Petacchi paintjob on the top-dollar Cento 1 has been so popular that Wilier have decided to do a similarly garish version of the less expensive Izoard, complete with Miche wheels with Fluoro decals. It'll certainly stand out on the sportive start line. 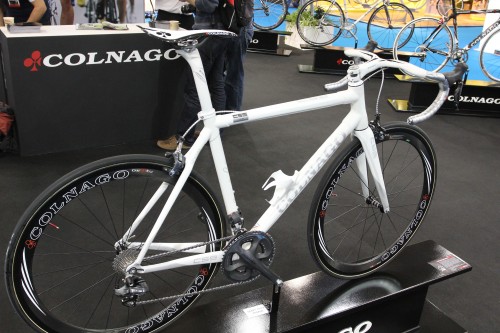 Colnago gave pride of place to the limited edition version of the C59 Italia. There's only going to be 59 of them in the whole wide world, so it'll be a pretty exclusive club and one that will have to make a significant investment in cleaning products to keep the bike shiny and white. Of course it comes with Campag Super Rec... What? Dura Ace? Really? Perhaps it goes with the paint job better. Price is TBC, if you have to ask and that... 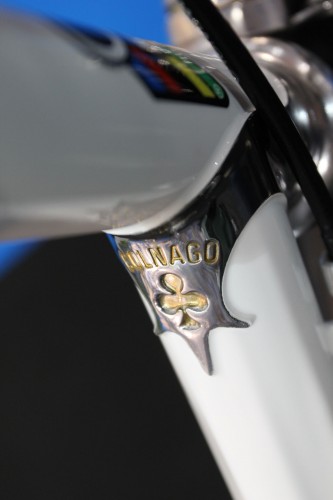 We also liked the Master X-Light. Colnago might have outsourced a lot of their production work but they're still knocking out these beauties in an Italian basement. There was lots of retro about at the show but Colnago do it much, much better than most, and the Master X-Light, with its scuplted tubes and lovely chrome work, is a real gem. 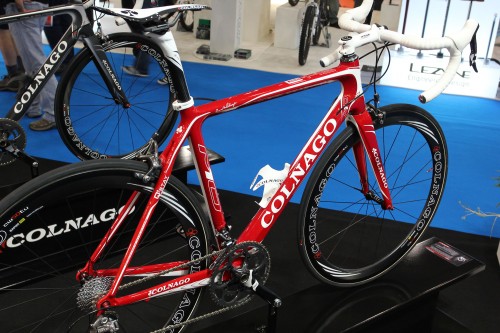 The M10 is a new frame, drawing on the lessons learned from the CX-1. Can you guess what they've done with the lateral stiffness and vertical compliance? Clue: one is more, one is less. The frameset will set you back £2700. 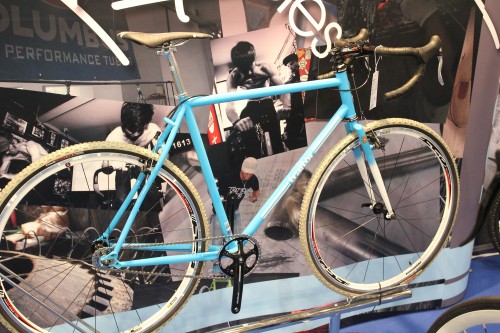 Them's some good looking bikes. It's nice to see people embracing the singlespeed cyclocross niche, it's a surprisingly versatile bike. Traitor's Crusade had a spaced out freehub instead of a 'proper' singlespeed wheelset, which was a bit odd. The fixed bike deserves a mention for the pretty seatclamp that works by pulling the top of the two seatstays together. 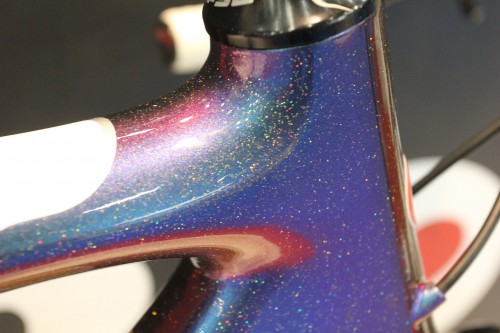 Not much new exactly, but special mention to the Merak which was on the receiving end of an insane disco biscuit paintjob which looked amazing/appalling/up-to-the-minute/incredibly dated (delete as appropriate). Certainly they must have found that particular tin of paint right at the back of the workshop next to the parts bin with all the old Cinelli stems and Concor saddles in it. We loved it. Not everyone did. Four and a half grand, and it's yours. 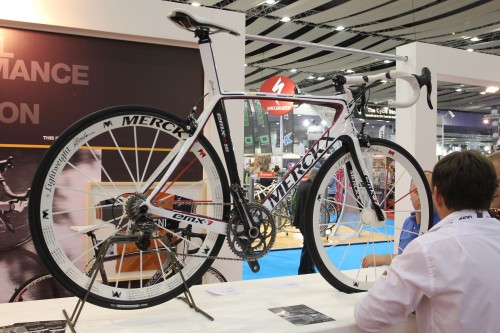 The great man was there in person on Thursday, looking a bit bored if truth be told but there was nothing boring about the special edition EMX-7 on display which carried a pant-wetting £13,000 price tag. It's a special edition built to commemorate Eddy's 65th birthday. Only 200 are being made, of which the UK will get a number in low double figures. Along the top tube are writ the highlights of the great man's palmares, and around the rims of the the special edition Lightweight wheels are some more of his wins. Super Record finishing kit goes some way to justifying that huge asking price. But not that far. 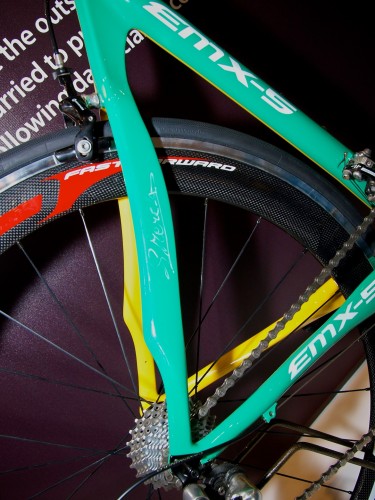 Also on display were a couple of EMX-5s from the Tour de France. Jerome Pineau's polka-dot bike looked pretty cool; Sylvain Chavanel's half-green-half-yellow affair looked a bit weird. But chapeau to them for knocking it out in an evening, and Eddy signed it too. 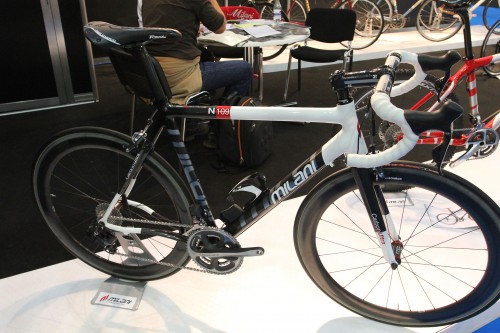 We like Milani. They make some good looking bikes. They don't have a UK distributor but then they're not looking for one; instead they're looking to make relationships with individual bike shops who can buy direct from the factory. That process is ongoing, so who knows? your local shop might be able to sell you one soon. Go and suggest it to them.

We've seen and covered a lot of the range before, but there were some new bikes at the show. We hadn't seen the N109 before, which sits below the top-dollar Specialissima in the range and features a sloping geometry and asymmetric head tube. The Isotta women's town bike we first saw at Eurobike but it's worth another mention for being a very lovely looking urban machine indeed, especially with the muted blue/brown paintjob which is a lot cooler than the pink/purple one we saw in Germany. 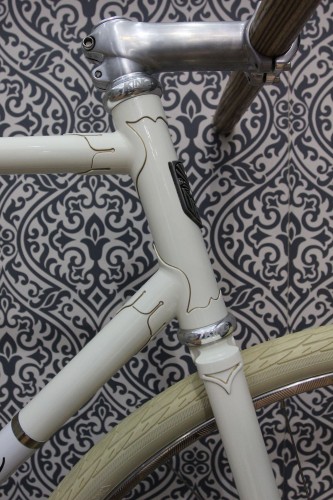 After getting into the Independent's 50 best bikes article last year and making waves at the Cycle Show, it's been a busy year for Demon's Tom Warmerdam; he's made nearly 30 bikes pretty much single handedly. Given that they're lovely and exclusive, with a price tag to match, it's no surprise that most of them get commissioned by 'solicitors and dentists' but framesets start at £1,200 so they're not out of reach for those not in danger of losing their child benefit. If you want a full custom lugset like the superb fixed bike on the stand, now that's a different matter... 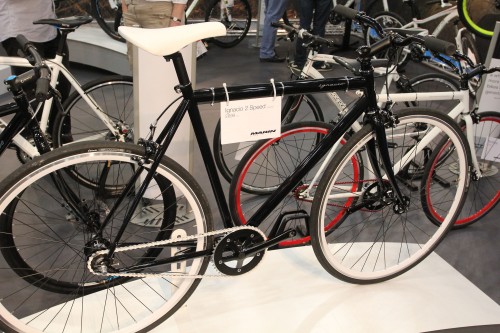 Like we reported at Eurobike, all of Marin's urban bikes are moving from 26" wheels to 700c. Given that they use mountain bike geometry for their urban bikes, that will pretty much make them 29ers, a bit like the Whyte C7 series bikes. We focused our attention on the Ignacio, anyway. Last year it was a classical drop-barred singlespeed road iron, but for 2011 it shares the Dominican's more shapely frame, and you get a Sturmey Archer 2 speed kickshift hub at the back. We liked the Dominican when we tested it and the new Ignacio looks a lot of fun too. 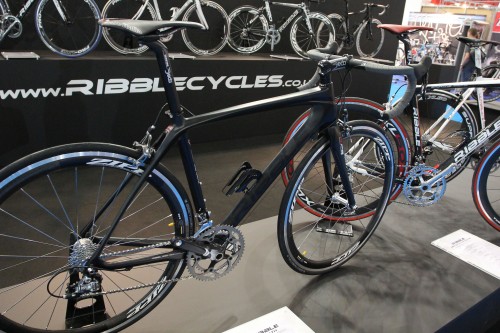 It's the first time we've seen Ribble at the show and they had a couple of shiny new bikes to pore over. First up is the Stealth, which is an aero road bike very much in the mould (not literally – at least we don't think so) of the new Felt F1 and Scott F01. It's a very shapely beast indeed, with a deep head tube section and flattened top tube, and it comes with a nice deep-bladed Carbon fork. It has internal cable routing, a BB30 bottom bracket and an asymmetric head tube. And all for a frameset price of £480. That's pretty astonishing value really; obviously we haven't tested it but we will, and soon. 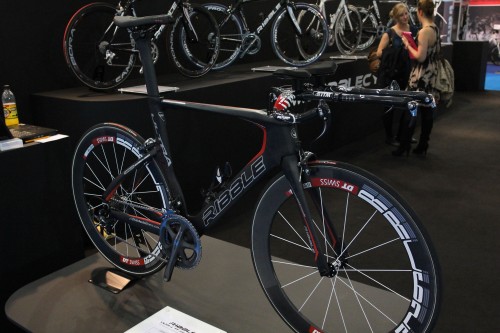 Ribble were also rolling out their Ultra TT frame, a bike that's been delayed because, apparently, a major manufacturer wanted to include it in their range before Ribble could get their hands on it. So, anyone recognise it? We didn't. Answers on a postcard (or comment below). Anyhow it's a very smart looking bike, although the discussion on the stand was whether to paint it matt black to cover up the Carbon, the rather random weave of which looks a bit odd. You get internal cables of course and a very neat seatpost bolt that has a windcheating rubber cover to save an extra 0.4 seconds – every little helps. Frame and fork price is TBC but it'll be under a grand, we understand.