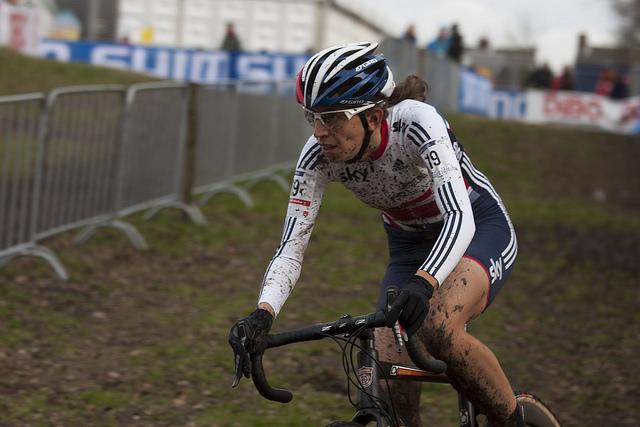 10 times British champion admits she doesn't quite have the fight any more - but remains committed to bringing young talent through...
by Simon_MacMichael

In a post on her website, the 37-year-old from St Albans said: “For the first time in my career I’ve had moments this season where I haven’t had the fight you need to compete with the very best.”

That should not deflect from a career in which she won the national cyclo-cross championships for seven years running from 2006 onwards and on three subsequent occasions, the other four won by her great friend and rival Nikki Brammeier.

Wyman also won the European championships twice, and in 2014 took the bronze medal at the world championships during a career in which she also racked up numerous wins on the cyclo-cross circuit in Europe and the US.

Today, she said: “In an increasingly competitive sport you cannot achieve what you are capable of without huge desire. If I continued I feel I would not be doing myself justice; that’s not how I would ever want to be remembered.

“The last 15 years of my life have been off the scale amazing. I could never have imagined this epic journey and I wouldn’t change a single thing.

“I mean every word of this and if you want to be a ‘cross racer in Europe you will experience everything from the harshest conditions and the lowest points to the ultimate highs.

“Every single day you are creating the best memories to tell the grandchildren, or in my case my dog,” she continued.

“When you are training in the brutal side winds that Belgium does so well, with freezing rain lashing at your face you will question your life choices.

“However I promise you the day you stand on a world championship podium you will only ever remember the sunshine drenched rides that made your heart glow.

“Although times haven’t always been rosy, as the sun sets on my racing career I know I’ve taken every opportunity I could and more,” she said.

“I’ve taken the sprinkling of talent I had and made the most of it. I’ve wrung out every drop of determination to achieve what I have.

“I have tried, failed and tried all over again from the first day of my career to the last and I know I will take this attitude with me into my next roles, whatever they may be.”

Since it is not an Olympic discipline – despite the efforts of the UCI to have it included on the programme, it fails the test to be included in the Winter Olympics since it is not carried out on snow or ice -  cyclo-cross is perhaps a bit of a Cinderella discipline within British Cycling since UK Sport funding is based on the prospect of success every four years at the highest stage.

Nevertheless, the end of Wyman’s competitive career comes at a time when the country has some of the best young riders around.

And anyone who follows Wyman and her husband Stef on social media will know that the couple, who are now based in Limoux in the foothills of the French Pyrenees, are committed to bringing young talent through in cyclo-cross, and particularly when it comes to getting young women racing.

Wyman said: “To all you up and coming racers, both girls and boys, I’m still here for you. I have a wealth of experience and am not going to ditch you all just because I’m not racing myself.

“I have an exciting role with my team and a responsibility to the sport to pass on my experience in every way from training camps and clinics, to race day lines and tactics.

“I promise no question is a bad question and I am also not done with pushing the development of the sport. I’m not sure what else I will be doing, my diary is open and it’s time for me to look for new challenges, I hope in the cycling world. That’s liberating and scary at the same time.

“The Helen 100 project has big goals both at grass roots and elite level competition. I’ve really got ambitions for women’s youth categories in cross and as you may realize by now I have a certain quiet dogged determination that has already been focused in your direction,” she continued.

She concluded by saying, “Thank you to every single person who has been part of my amazing career on the bike and thank you to every one of you who has helped me make a difference in our very special sport off the bike.”

A resident of Belgium for much of her racing days, she concluded with a Flemish touch.

“For now this isn’t goodbye, more like tot ziens.”