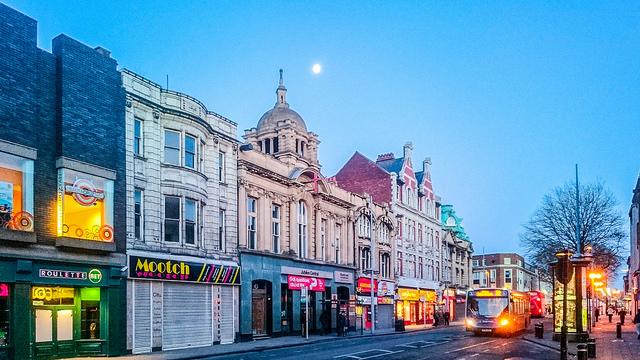 Hull - licenseed CC BY ND 2.0 by Keith Laverock on Flickr

Councillors in Hull are reviewing the city’s existing policies on cycling, including the provision of infrastructure, and are seeking inspiration from the Netherlands to get more residents on bikes.

Hull Live reports that initiatives aimed at encouraging still more Dutch people to cycle such as paying people to ride for work will be considered by Hull Council’s scrutiny committee, as will the country’s world-leading infrastructure.

Hull has a head start on most other English cities when it comes to cycling – it already has some of the highest levels of daily cycling in the UK, ranking fourth behind Cambridge, Oxford and York.

That is a legacy of the city’s industrial past when workers would stream out of the factory gates at the end of the day – something that died out elsewhere with the rise of private cars, but has persisted in Hull more than anywhere else.

Car ownership remains low in Hull compared to similar cities, and its flat topography make it ideal for cycling, with 8.5 per cent of commutes by people living there undertaken by bike according to the 2011 Census.

Cycling infrastructure on the road, where it does exist – the major commuter route, Spring Bank, has none at all – is low-quality and, like off-road cycle paths in the city, is in a poor state of repair, however.

Initially, the council plans to spend £2.5 million over the next two years over maintenance as well as introducing advance stop lines at major road junctions.

As the newspaper notes, however, that is a drop in the ocean compared to the half a billion pounds Greater Manchester is investing in cycling and walking, including 75 miles of segregated cycle routes.

It adds that the council is likely to set up a review panel to consider next steps such as potentially introducing a pilot Mini Holland-style scheme in part of the city.

Councillor Paul Drake-Davis said: "To encourage a change in behaviour we need to demonstrate a change in the culture of getting from A to B.

"Doing it in one pocket of the city allows people from other parts of the city to see if it works and, if it does, they will want it in their area too."

The council’s regeneration director, Mark Jones, said that car ownership was now not a priority for many.

"We are seeing a lot of office and studio apartment queries at the moment in the city centre and for investors, car ownership is very much a secondary issue,” he said.

“They know people who choose to live and work in a city centre might not necessarily have a car.

"The Dutch model is all about high-density living and working and that is what we are trying to create in the city centre."