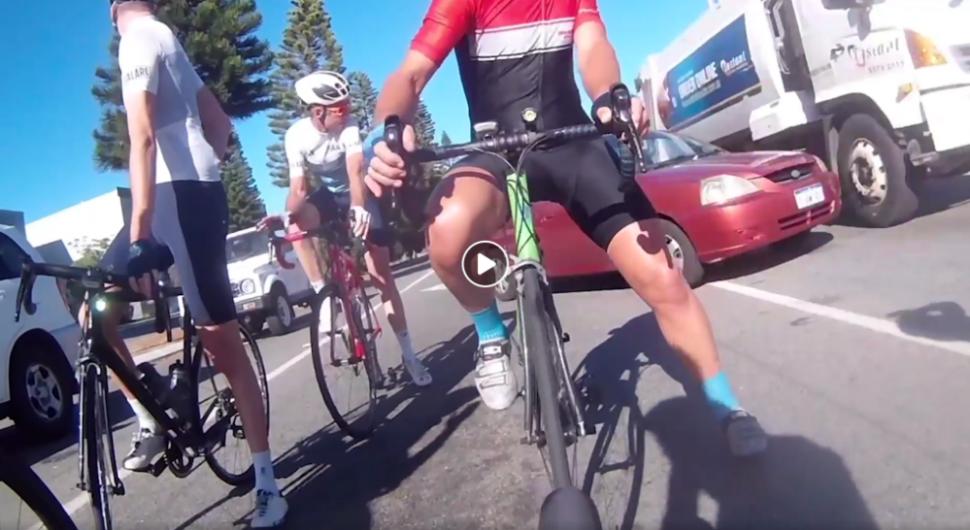 Video: Impatient driver pulls out at red light to get round cyclists, doesn't check mirror ... and gets hit by bin lorry

Incident in Western Australia was caught by cyclist's rear-facing Cycliq camera...
by Simon_MacMichael

A cyclist in Western Australia has filmed the moment an impatient motorist pulled out into the road to try and get around him and other riders at a set of traffic lights – and drove straight into the path of a garbage truck after failing to check their mirrors.

The cyclist who provided the footage said: “We were turning right at the traffic lights and so were in the turning lane.

“There was a red arrow, so we couldn’t proceed through the intersection.

“A car came up behind us and began to beep at us because he wanted to go straight through the intersection, and given there was a green light for cars going straight, I imagine he thought we weren’t paying attention.”

The driver decided to pull out … and you can see for yourself how that turned out on the video.

Perth Now says that the cyclists, none of whom was hurt, went to help both drivers involved in the collision.

“It’s very easy to see drivers on their phones while driving if you are a little higher on your bike,” the cyclist added.

“I’m not saying the driver was on their phone in this case but perhaps he wasn’t paying as much attention as he could have and that resulted in him moving into the way of a huge truck.”

Chris Singleton, chief executive of Cycliq, which is based in nearby Perth, said:  “If cyclists were a minority group then certain parts of the racial vilification act would come into play,” he said.

“You only have to look at the comments online so see the amount of vitriol directed towards cyclists.

“If a cyclist has a near-miss the comments are along the line of ‘next time you should finish the job’,” he added.