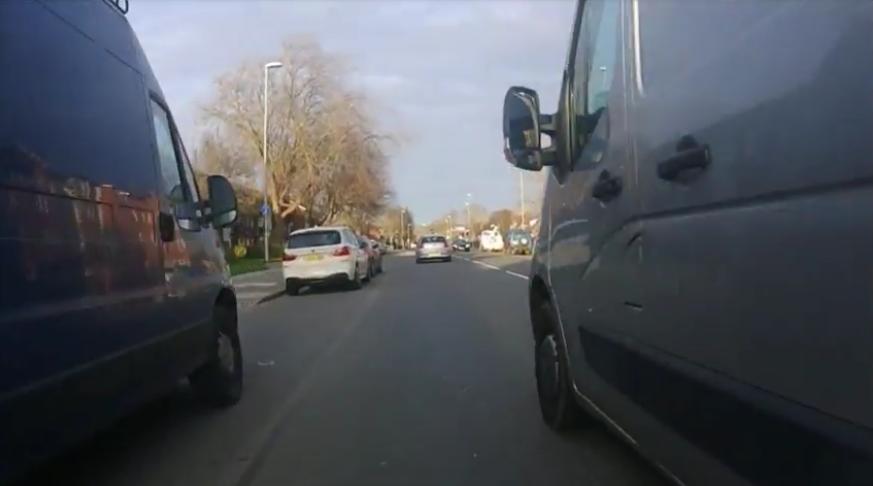 Near Miss of the Day 230: Cyclist squeezed between parked vehicles and close-passing van (includes swearing)

Our regular feature showing close passes from around the country - today it's Hampshire...
by Simon_MacMichael

Today's video in our Near Miss of the Day series shows something that will be familiar to any cyclist - a motorist overtaking a rider as they pass a line of parked vehicles, causing them to get squeezed between the two.

It's made worse in this case by the fact there is a vehicle coming in the other direction too - meaning the van driver gives even less space to the cyclist being overtaken.

It was filmed on Monday in North Parade, Portsmouth by road.cc reader Adam, who told us: "My language is a bit colourful as the van passes, but I composed myself and just looked at the driver at the traffic lights.

"I could not believe that he overtook me whilst I was passing parked vehicles and there was an oncoming vehicle on the other side of the road.

"He seemed to realise his poor spacial conduct, but then could have given more passing space after the lights to redeem himself.

"This is one of many closes passes that I have experienced on Northern Parade, and my lack of confrontation this time may mean that I am starting to become immune to it."

1
Decathlon launch a new entry-level gravel bike, the Triban RC 120
2
Win an amazing 3T Exploro GRX Pro bike worth €4000!
3
“A small, almost nothing, story” – Mark Cavendish hits back at report he may miss Tour de France
4
Near Miss of the Day 415: Cheshire Police issue close pass compilation
5
Cycling UK complains to Sunday Times over Rod Liddle’s “piano wire at neck height” column – published on weekend a cyclist was hospitalised by riding into such a trap
6
Sunday Times says Rod Liddle “piano wire” column “not intended to be taken seriously”
7
Fractured spine for Yorkshire cyclist after hit-and-run motorist ‘deliberately’ drove at riders
8
Government to issue half a million £50 repair vouchers to get neglected bikes back on the road