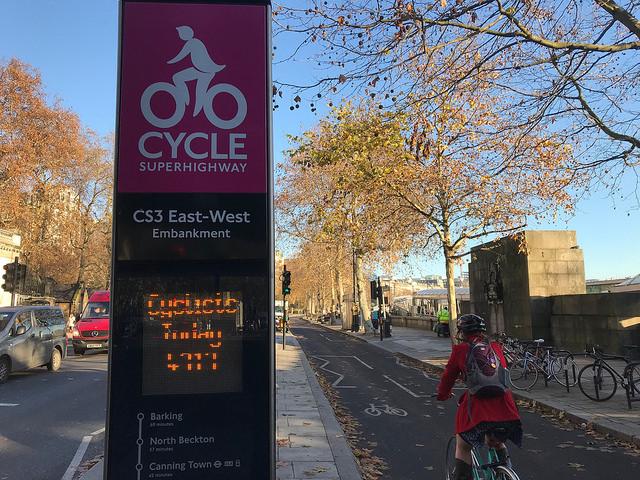 Shaun Bailey claimed that cycle route along Embankment left riders "pinned up against the river"...
by Simon_MacMichael

The Conservative candidate for the London mayoral elections in 2020 has attracted ridicule on social media after claiming that the Cycle Superhighway running along the Embankment leaves cyclists “pinned up against the river.”

Shaun Bailey, a London Assembly member since 2016, has called for the Cycle Superhighway 3 to be re-routed away from the river, but Will Norman, London’s Cycling & Walking Commissioner, insists that will not happen.

Speaking at the London Assembly last week, Bailey said: “There is no doubt that there is much more standing traffic [on the Embankment].

“When you cycle past, you are breathing in [exhaust fumes from] whatever diesel lorry happens to be next to you.

“Surely there is something to be said about having a slightly more circuitous route all the way through [the city centre] that would have more stop-offs on it?”

Citing an Evening Standard report of Bailey’s comments, Norman said on Twitter: “For the last time – we're not rerouting the fantastic cycle route along Embankment.

“The future success [of] London depends on enabling more people to leave their cars behind and walk / cycle instead.

“This can only be done by building a city-wide network of safe cycle routes like CS3.”

Among those who picked up on Bailey’s “pinned up against the river” comment was the broadcaster and cyclist, Jeremy Vine.

Got “pinned up against the river” on my bike yesterday. Terrible experience pic.twitter.com/Eu7JGEdm5N

Another Twitter user, Hackney Cyclist, posted several pictures of cyclists “pinned up” against the Thames.

Look at these people pinned up against the river. Must be awful for them pic.twitter.com/qg42AGVTJA

A number of others chipped in, too, with their own experiences.

Took my daughter for a pinning up against the river last weekend. I'm such a bad parent! Although she seemed to enjoy it... pic.twitter.com/V4ND3yXBAz

Oh *bless* you @ShaunBaileyUK. Personally, I literally love being “pinned up against the river” when walking and cycling east/west through London.

And by the way if you want people to breathe clean air build more direct (not circuitous) bike lanes so fewer people use cars. https://t.co/1elUqbkIEu

Meanwhile, one Twitter user pointed out that the infrastructure also has an important benefit for pedestrians.

The Embankment cycle lane is the jewel in the crown of London cycle lanes and a really important "byproduct" of the lane is the substantial buffer it creates for pedestrians between them and the motor traffic. It has created a quieter more relaxing walkway for its many tourists.

Last month, rejecting calls to re-route the Cycle Superhighway and accusations that it caused congestion and increased air pollution, Mayor of London Sadiq Khan made it clear that higher levels of motor traffic – and increased emissions – are due to factors including more private hire vehicles and people ordering goods online and having them delivered to their workplace.

The last word goes to Twitter user Apple Butter Man, in response to someone who claimed the infrastructure goes unused.