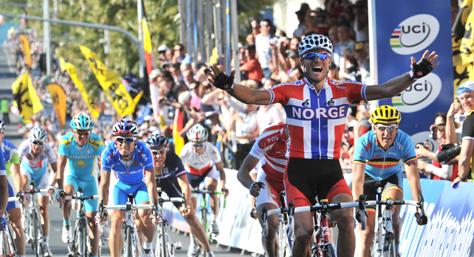 Road World Champs 2010:Hushovd gets gold as he wins in Geelong +video

Thor Hushovd will be sporting the rainbow jersey for Garmin-Cervelo next year after sprinting his way to World Championship victory following a thrilling men’s road race in Geelong, with Matti Breschel of Denmark second and Australia's Allan Davies third.

It’s an outcome that few would have envisaged as the 263km race which began in Melbourne entered its last five kilometres, pre-race favourite Philippe Gilbert leading the field as he and a select six-man chasing group seemed destined to battle it out for the title. Gilbert had attacked at the start of the eleventh and final climb of Chalambra Crescent, the first and longest of the two climbs on the 15.9km circuit.

The Belgian crested that climb with a 17 seconds advantage and also led over the day’s final ascent, his pursuers led by home favourite and defending champion Cadel Evans and Russia’s Alexander Kolobnev, silver medallist in 2007 and 2009, as well as Breschel, Luxembourg’s Frank Schleck, Koes Moerenhout of the Netherlands and Germany’s Paul Martens.

With around four kilometres to go, the Omega Pharma-Lotto rider was clearly in the red zone as he desperately tried to take on more food ahead of the finish and stay ahead of his chasers, who were starting to close. However, just as his six pursuers seemed set to catch him, a larger group comprising around 20 riders came from nowhere to sweep by and contest the finale.

That group included Hushovd. While in July’s Tour de France and last month’s Vuelta, the Norwegian was off the pace in bunch sprints where the likes of Mark Cavendish, Alessandro Petacchi and Tyler Farrar were around in the closing kilometre, equally he is still the man to beat in a sprint where any kind of selection has been made prior to the finish.

Hushovd proved that in Stage 3 of the Tour de France over the Paris-Roubaix cobbles, and again in Stage 6 of the Vuelta in Murcia. Today, with the biggest prize of all at stake, he did so once again, with Cavendish having abandoned after dropping off the leading group with five laps left and other pure sprinters such as Farrar and Germany’s Andre Greipel also missing from that final group. Neither of Britain's other two riders, David Millar and Jeremy Hunt, finished the race.

At one point the quintet led by more than 23 minutes, but despite the ban on race radios in force at the championships, their attempts to stay away were always doomed as the chasing pack slowly reeled them in.

After Kvachuk, the final survivor of that group, was caught with two and a half laps to go, Vuelta champion Vincenzo Nibali went on the attack, accompanied by fellow Italian Giovanni Visconti, Moerenhout, Chris Soresen of Denmark and Colombia’s Jose Serpa Perez, but they were caught ahead of the bell, with the 40-strong leading group crossing the line together to start the final lap.

Speaking after nearly six and a half hours of racing, Hushovd said: “It is hard to understand that now I won at the worlds. It’s a dream and sometimes I feel it’s an unreal dream and now I’ve won it here in Geelong, Australia, so that was amazing, I’m speechless.

"Of course, the last lap was really hard when Gilbert attacked but I think the wind was too strong out there. It was too hard to stay in front alone. I just told myself don't make mistakes and don't mess it up, I said to myself 100 times," added the Cervelo TestTeam rider, who planted a kiss on the frame of his bike straight after crossing the line.

"I think it was still a perfect race," added Hushovd, who already has one rainbow jersey in the closet, for the Under-23 time trial he won at Valkenburg in 1998, although his face risked turning to thunder today as organisers played an extremely truncated version of the Norwegian national anthem as he stood on the podium.

He also immediately outlined his main goal for next season, saying that riding into the veledrome at the head of the race to win Paris-Roubaix in the rainbow jersey "would be the biggest dream ever."

There was frustration for Breschel, who won bronze in Varese two years ago and now has silver to add to it, with the ultimate prize still eluding him. The Dane, who rides for Team Saxo Bank, banged the handlebars with his fists as Hushovd took the win by a bike's length.

“I just went with everything and then Thor, he passed me with 50 metres to go. So at the moment, of course I’m disappointed because today I went for the victory. But second place is a big result.”

Breschel already has next year's race, to be held on what will for him be home roads, in his sights. “I’ve come close a couple of times and in Copenhagen next year I know the roads and all the people are there, so of course it gives you morale to do well in your home country.”

Bronze for Davis meant that Australia pipped Great Britain to lead the medal table. The countries had been tied this morning with one gold and one silver apiece.

“I’m the only one up on the podium but for sure it was a huge team effort, I thought we rode tactically brilliantly today," said Davies afterwards.

Filippo Pozzato of Italy appeared to be the strongest finisher of all, but made his move too late, missing out on bronze by just 10 centimetres, and if he'd gone sooner, the rainbow jersey could have been his.

"Thor looked at me, I took Freire's wheel, but today Oscar's wasn't the right one. I wanted at least a medal, you ca see how I was going in the last 30 metres. It only needed me to be a couple of positions higher up when we launched the sprint and things could have gone differently."

The 29-year-old, who lives in Montecarlo and has a reputation as a bit of a plyaboy, confessed three weeks ago that he hasn't had sex since breaking up with his fiancee during May's Giro d'Italia and said that he was prepared to remain abstinent as he focused on winning the rainbow jersey.

Presumably he's seeking to remedy that right now to help put his world championship disappointment behind him.