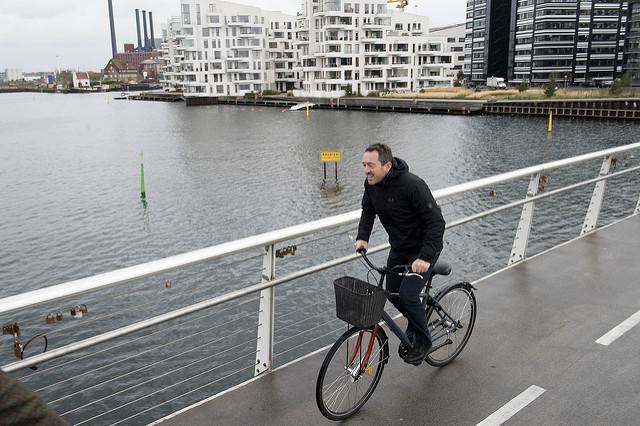 Less than six months before the United Kingdom is due to leave the European Union (EU), it has been announced that Manchester is to benefit from mentoring by Copenhagen on how to become more bike friendly under a scheme entirely financed by the EU and which falls under its wider Horizon 2020 programme.

According to the Cycling Embassy of Denmark the initiative, called Handshake, forms part of the EU’s Horizon 2020 project – its biggest ever research and development programme.

It will see 10 cities across the EU that have aspirations to become true cycling cities mentored by three that can already lay claim to that status – Amsterdam, Copenhagen and Munich.

Besides Manchester, Copenhagen will also act as mentor city for the Latvian capital, Riga, and Helsinki in Finland.

The other cities involved in the programme, which is due to last between  are Bordeaux, Bruges, Cadiz, Dublin, Krakow, Rome, Turin and Dublin.

The mentor cities will each be looking to learn something too – in Copenhagen’s case, it hopes to learn from Amsterdam about cycle parking facilities and how to deal with bikes that have been abandoned.

At their first meeting last week, delegates from the 13 cities visited the Danish capital to learn how cycling had become so popular there and to see first-hand the city’s infrastructure.

During the three-to-five years that the programme will run, the cities involved will participate in workshops and study trips, while the University of Amsterdam will be co-ordinating their findings.

Chris Boardman, now Greater Manchester’s cycling and walking commissioner visited Copenhagen in  2015 in his role as British Cycling’s policy advisor, and invited former cycling minister Robert Goodwill to accompany him on his trip to the city.

Speaking of the EU initiative, he said: “Handshake is a really exciting opportunity for us to learn form the best. We want to turn Manchester into a city where the bicycle is the most obvious and attractive means of transport.

“This collaboration will give us a much better understanding of what Copenhagen, Amsterdam, and Munich have done so well – and to incorporate those ideas and experiences into our work here in Manchester.”

Copenhagen’s mayor of technical and environmental affairs, Ninna Hedeager Olsen, said the city would not be resting on its laurels and that it could improve conditions for cyclists even more by learning from elsewhere:

She said: “If Copenhagen is to be the world’s best city for cyclists, we have to be at the cutting edge so we don’t get left behind.

“Copenhagen has very good bicycle infrastructure, but when it comes to bicycle parking facilities and handling abandoned bikes, Amsterdam is 10-15 years ahead of us. We need to learn from their best practice.

“Testing the established ways of doing things is always healthy, and the cooperation with Amsterdam can definitely challenge our conventional thinking.

“Amsterdam has many years’ experience establishing bicycle streets where the street is laid out on the cyclists’ terms but where cars are also welcome. This is interesting know-how which we will now systematically get access to.”

She continued:  “The big cities are responsible for the majority of the world’s CO2 emissions, and so we also have a deciding responsibility for developing and spreading the good sustainable solutions.

“Every year, Copenhagen receives a high number of delegations who want to know the secret behind Copenhagen’s success as a cycle city.

“I hope that we through this new co-operation can help spread our know-how to an even higher degree,” she added.

The Handshake programme, which was announced earlier this year, is co-ordinated by Isinnova – the Institute of Studies for the Integration of Systems – an independent research institute based in

Given that the project is fully funded by the EU, we have contacted Transport for Greater Manchester regarding the implications of Brexit for the region’s continued participation in the programme and will update this article with their response when we receive it.