Endura reveal how they made Alejandro Valverde's rainbow jersey

When Alejandro Valverde crossed the line first to win the World Championship road race in Innsbruck last weekend, the staff at Endura, which supplies his Movistar team, knew that they had a race of their own to run. 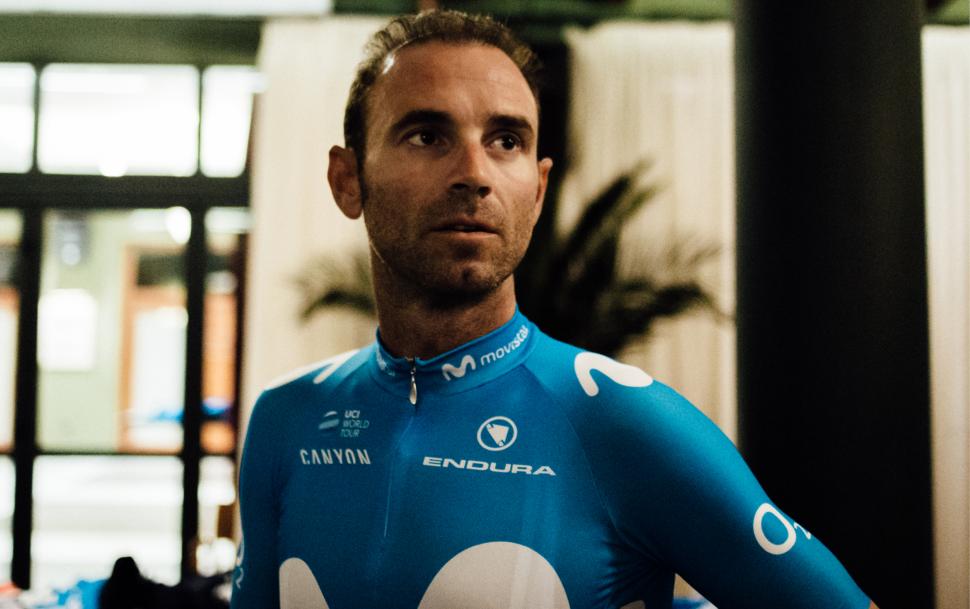 With the Spaniard due to race in Italy in the coming days – Valverde is down to ride the Tre Valli Varesine on Tuesday and il Lombardia next Sunday, and may also race Wednesday’s Milan-Turin – the Livingston-based business had just one week to design and produce his rainbow jersey.

Here Endura recounts the processes that resulted in the kit that the new world champion will debut on Tuesday being designed, signed off and produced.

As soon as Alejandro Valverde crossed the line with arms aloft as the new UCI Road World Champion last Sunday, the cogs of the finely tuned machine that has supplied technical clothing to Movistar Team since 2014 began to turn almost as soon as Bala’s wheels drew to a stop beside the podium.

In a series of Whatsapp messages and emails between team and their expert tailors back in Scotland on Sunday evening, a plan of attack was agreed with #EnduraCustom even as Valverde was celebrating his magnificent victory in the Austrian Tirol. The plan – to produce kit worthy of a World Champion. Of course, Endura are no strangers to manufacturing rainbow jerseys, having recently produced MTB versions for Rachel Atherton and Kade Edwards (Trek Factory Racing DH) and previously for para-cycling World Champion Denise Schindler.

Unlike some pro team’s clothing suppliers, Endura make kit end-to-end in-house by the same production team that produce over 50,000 garments a year for clubs and teams worldwide. This is no development lab, it’s a proper factory, employing around 60 staff, all based in Livingston, near Edinburgh. Movistar Team’s kit designer Stuart Kirk kicked off the production process first thing on Monday by consulting UCI’s fascinating technical documents on kit design, before producing some initial designs for approval by Endura management, then Movistar Team and then the UCI. 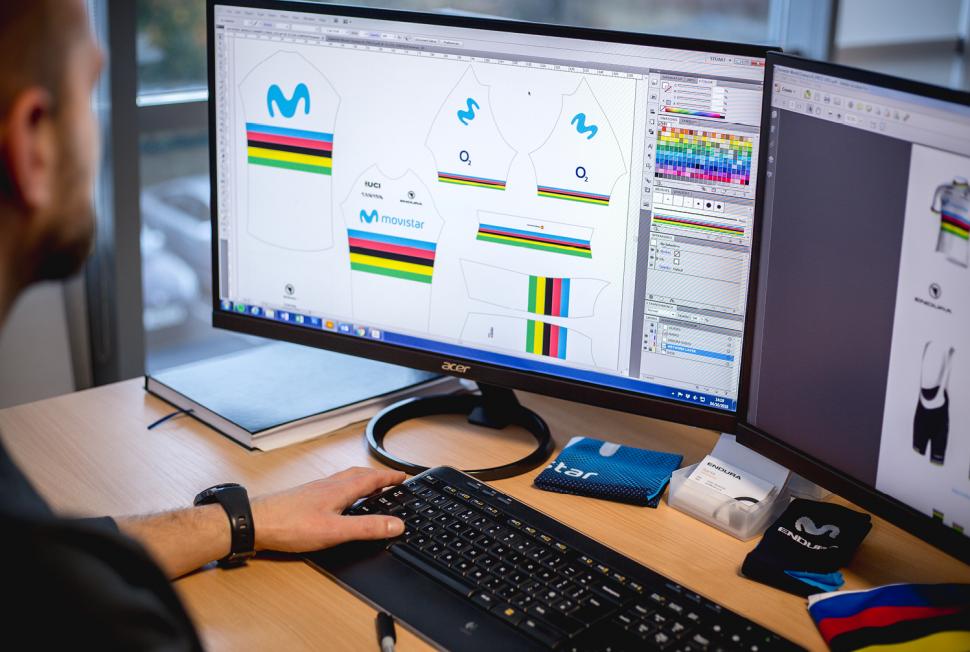 When the design was signed off then the clock started ticking in earnest. Patterns were placed on layers of fabric to be run through Endura’s automated cutting table to create the eleven panels that make up a team issue jersey (and twelve more for the bibshorts). Meanwhile, Stuart Laidlaw’s print shop team were watching the design edging through their large format printer, ready to be passed on to the heat pressing team next door. 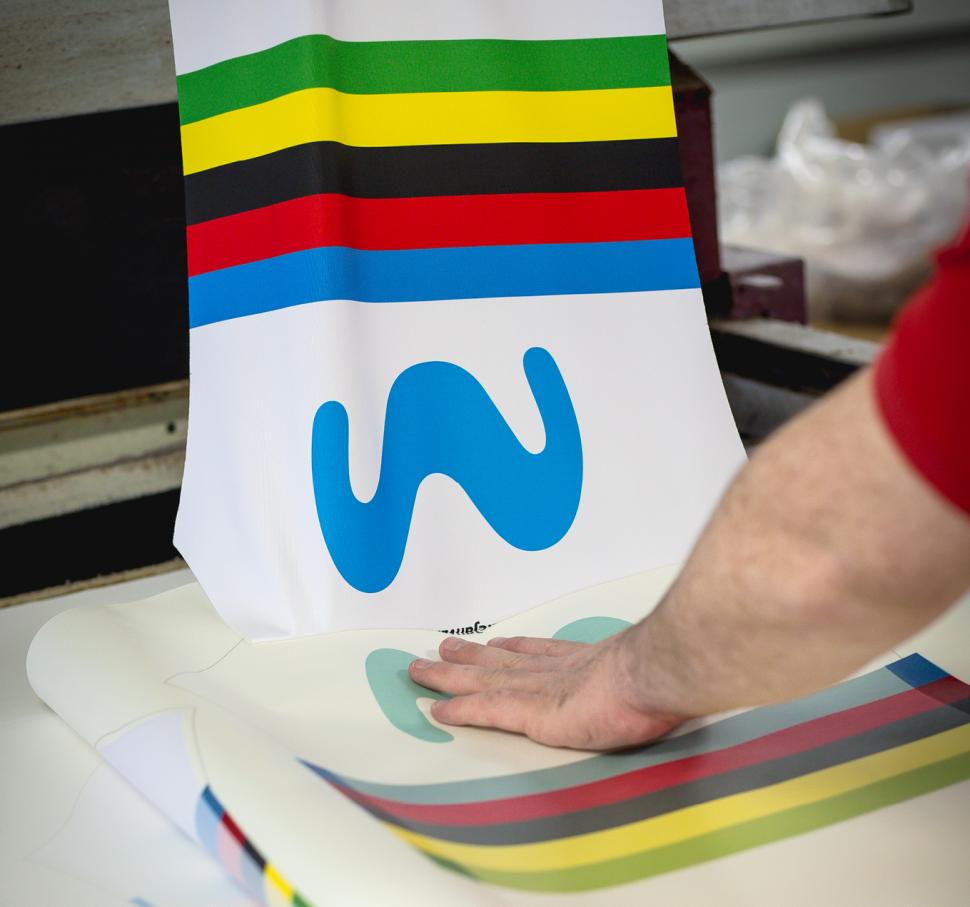 If you’ve not seen dye sublimation printing in action, it can resemble a form of magic as a mix of heat and pressure transfers hi-tech inks from printed sheets straight into the fabric itself. No further treatment is required to make the panels colourfast. Just one further step is necessary for Movistar Team’s kit with parts of the jersey heading a few work stations along to have Endura’s proprietary Surface Silicone Topography technology applied by a small crew of specialist technicians. 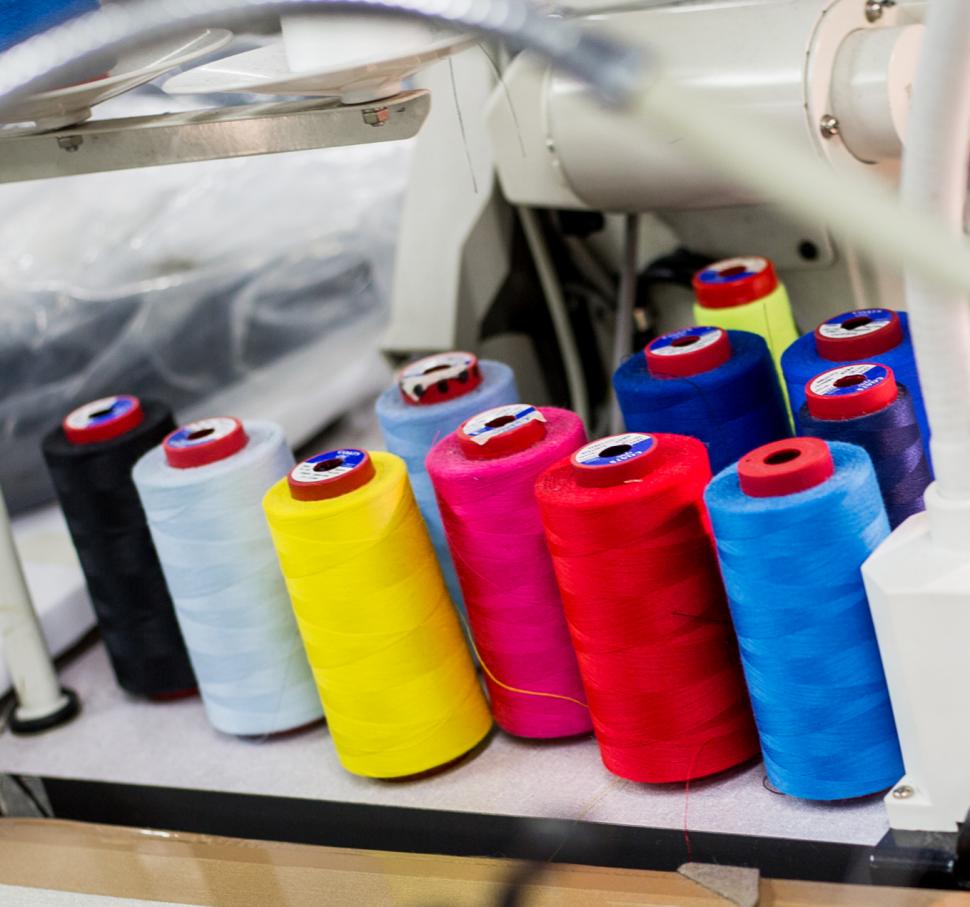 The whirring sewing machines used by expert machinists have been the beating heart of Endura since the company was founded 25 years ago and some of them have been with the Scottish company since the very early days in the small factory that spawned a global brand. Zips are added to jersey panels, pockets are created and Alejandro’s favoured 700-series pad is sewn into the bibshorts before heading down the line for a QC check under the watchful gaze of Operations Director Alison Moodie. 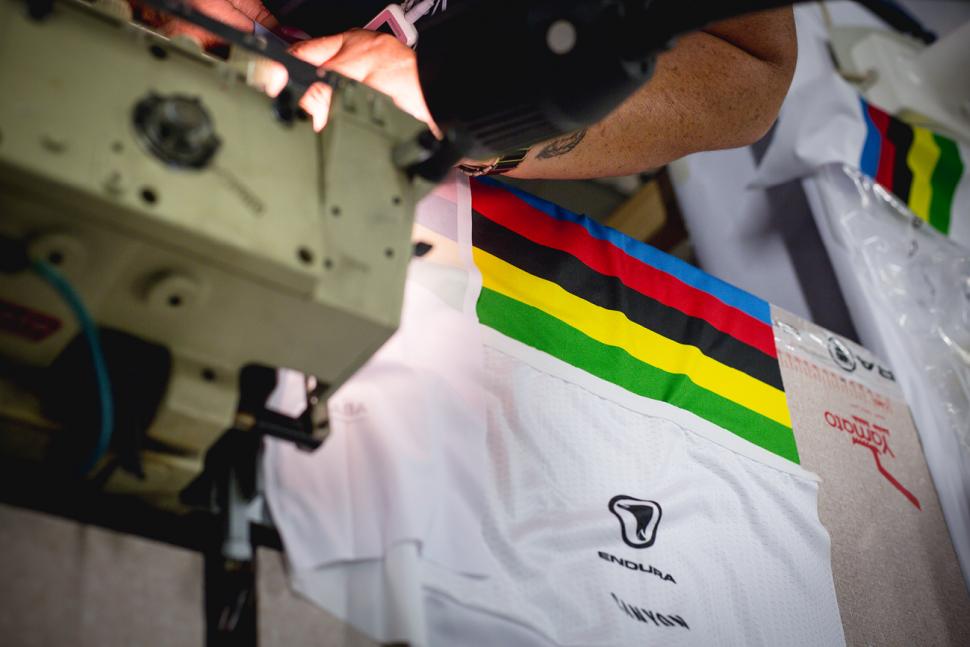 From start to finish the entire process took less than the 6 hours and 46 minutes that it took Alejandro to win his World Championship, but as modest Scots, the team at Endura wouldn’t like to boast just how quickly they can produce an outfit for a World Champion.