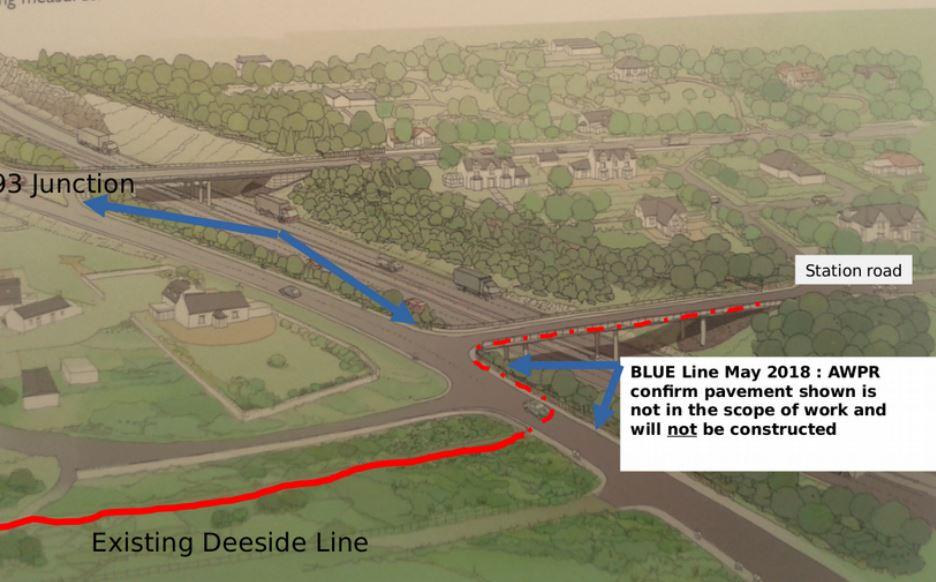 Cyclists on a heavily used off-road commuting and leisure route in Aberdeen are having to cycle into the path of oncoming traffic where it meets a bridge over the city’s new £745 million bypass – because Transport Scotland apparently forgot to stipulate making provision for cyclists’ needs when putting the contract out to tender.

The bypass, officially the Western Peripheral Route, was featured on road.cc last week when we posed the question, Is this the worst cycling event ever? The event in question, prior to the road being opened to motor traffic(cyclists will be banned) is a 'festival' that people won't be able to take their own bikes to, and will be shuttled in and out by bus.

Now a more serious issue has emerged. Previously, people using The Deeside Way, part of the National Cycle Network and hugely popular with people commuting by bike to and from their workplaces in the city, as well as with cyclists, walkers and horse riders, could cross the B979 Milltimber to Maryculter road easily and safely.

However, reconfiguration of the road layout to construct the bridge over the new Aberdeen Western Peripheral Route (AWPR), which opens next month, means that cyclists have to ride into the path of oncoming traffic on a 30 metre section of the road.

Cyclist Carl Gerrard, who lives in nearby Culter alerted road.cc to the issue after reading our article about the ‘festival’.

> Is this the worst cycling event ever?

The problem is highlighted in the drawing above, used by the managing agent during a public consultation in 2014, and supplied to road.cc with annotations by Carl.

The red line shows the route of thee Deeside Way and a proposed pavement on the west side of the B979,  which Carl says was discussed with engineers during the consultation meeting but not forming part of the final plans.

He told us that despite the efforts of local campaigners, neither Aberdeen City Council nor Transport Scotland had taken action. Speaking to the Press & Journal, he described the current layout as “lethal” and outlined  the problems riders are now encountering.

He said: “The AWPR is costing £745 million and is dozens of miles long, but for the sake of building an extra 30 metres of path, people’s lives are being put in danger every day.

“I cycle on the Deeside Way every day to work in Tullos. Although as an able-bodied adult I’m able to launch myself over the crossing pretty swiftly, for more vulnerable users and children it’s just a safety nightmare.”

Local MSP Maureen Watt has urged Transport Scotland to remedy the situation. She said:  “Many of my constituents are concerned about the apparent lack of planning for a footpath linking the Milltimber Brae Overbridge to the Deeside Way in the vicinity of the new AWPR.

“Having raised these concerns with Transport Scotland in June, they assured me that although the original planning process did not include a footpath, it was subsequently recognised it would be a necessity.”

Transport Scotland has confirmed it intends to address the issue, with a spokesman saying: “Plans are being progressed to fully reinstate the crossing point on the Deeside Way where it meets the B979. This work will be carried out at the earliest opportunity.”

That cannot come quickly enough for those who have to cross the road on bike or foot, with Carl saying: “With the speed that cars go up and down this road, it really is just a lethal situation.

“It’s horrible and I think that unless this is fixed something terrible could very well happen.”

He also had an answer to the question we posed in the headline of our earlier article, “Is this the worst cycling event ever?”