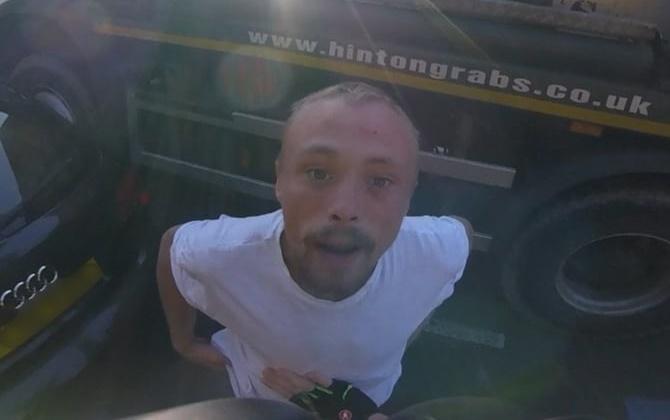 The Metropolitan Police has issued a name and photo of a man in connection with the incident last week in which a driver was filmed aiming an Audi at a group of cyclists on the A24 in Clapham.

Detective Constable James Preston from Brixton CID, said: "We have been working hard to investigate this incident since first becoming aware of it on Wednesday 01 August – and have issued an image of our main suspect.

"Today we are naming this man as Shane Seymour. He is known to have links to South London and the Canterbury area.

"Have you seen him, or do you know where he is? Please contact us or Crimestoppers if so as we urgently need to speak to him in relation to this matter. If any members of the public spot him, do not approach him but call 999 straight away.”

Anyone with any information is asked to call police on 101 and quote CAD 1581/1Aug. Alternatively, contact Crimestoppers anonymously on 0800 555 111.

Footage shows the driver throwing objects from his car at cyclists riding on Cycle Superhighway 7. He then turns left and carries out a series of dangerous manoeuvres, reversing back towards the cyclists before doing a three-point turn so as to drive forwards at them.

In one video, the driver can clearly be heard claiming that he is driving a stolen car. He then reverses at speed and disappears down Dorset Road.

Police know that the car was stolen and had false plates.

"It is only a matter of luck that no-one was seriously injured or even killed by this reckless driver,” added DC Preston. “The sooner we can apprehend him, the better.

"We’d also still like to hear from anyone who witnessed this first-hand who have not yet come forward. Anything you may be able to remember and tell us could really help this investigation.

"I would like to thank the public in advance for their help with our enquiries."