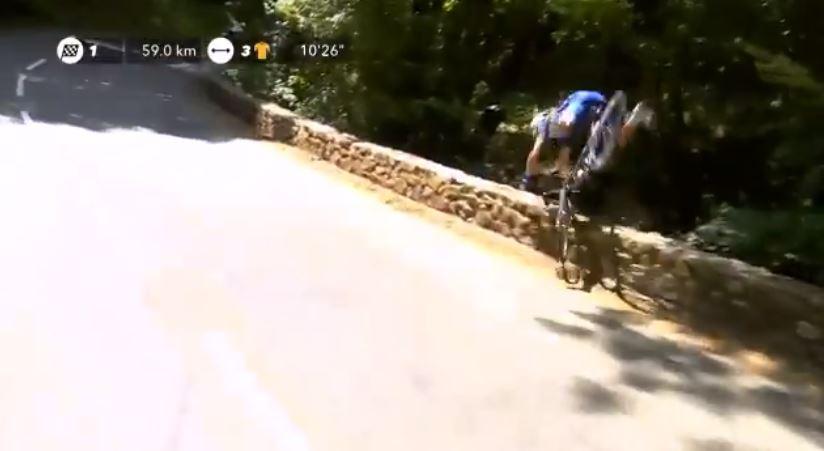 Philippe Gilbert has said he “had a lucky escape” after yesterday’s crash in the Tour de France that had TV viewers fearing the worst after he plunged over a parapet. The 35-year-old finished the stage, but it was later discovered that he had broken a kneecap, and the former world champion has now withdrawn from the race.

Out alone at the front of the race, the Quick Step Floors rider lost control of his bike and was flung head-first over a wall and into a ravine on the descent of the Col de Portet d’Aspet.

CRASH! @PhilippeGilbert can't regain control of his bike, disappears over roadside barrier and flies into the undergrowth in the middle of this descent. He re-emerges moments later and bravely returns to the saddle. #TDF2018 pic.twitter.com/nmj0KzK55K

It was a heart-in-mouth moment for anyone watching on TV, but shortly afterwards, the Belgian was shown on screen giving a thumbs-up to the TV cameras as he remounted his bike and completed the remaining 60 kilometres of the stage.

Gilbert, unsurprisingly, received the day’s combativity award at the end of the 218 kilometre stage from Carcassonne to Bagneres-de-Luchon, won by his team mate Julian Alaphilippe.

But it was only when he was checked over at a hospital in Toulouse yesterday evening that it was discovered he had fractured his patella.

Thank you all for the support after yesterday’s crash. I have done everything I could to continue in @LeTour, but unfortunately it’s not longer possible with a fracture of the patella. As always I will come back stonger! #TourDePhil #TDF2018 pic.twitter.com/FVobfmxhfz

"I want to say that I’m happy to be here after that tough moment," he said.

"This isn’t how I wanted to finish my Tour and leaving it like this really hurts.

"I crashed and it was all my fault. I simply took the wrong line.

"I fell onto rocks and, when I landed, I thought I’d been broken apart.