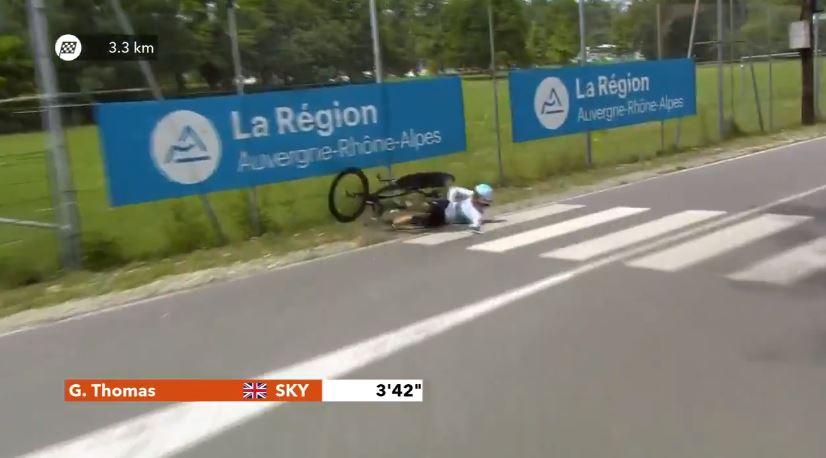 “Could have been a lot worse.” That’s the verdict of Team Sky’s Geraint Thomas after he crashed spectacularly on a right-hand corner during today’s 6.6-kilometre Prologue in Valence of the Critérium du Dauphiné.

The Welsh star, who sustained cuts and bruises in the spectacular chute, recovered to finish the stage in 43rd position overall, 21 seconds behind the day’s fastest rider, his Team Sky colleague Michal Kwiatkowski.

Didn’t think I went in too fast... Obviously was All ok though, just some cuts, could have been a lot worse!! At least the form is good https://t.co/AT5XXWKvuW

Thomas’s crash apart, it was a good day for Team Sky, with Italian time trial champion Gianni Moscon  posting the third fastest time to get into the best young rider’s white jersey.

Kwiatkowski, who has not raced since Liege-Bastogne-Liege in April said: “After 40 days without racing of course it’s a bit of a surprise, but I know how hard I was training to be in good shape here in the Dauphine, as well as preparing for the Tour.

“You have to always be at the start thinking about the win, otherwise you are not able to perform well.

“It's going to be difficult, the transition I have to make from spring and performing in the Classics, to getting ready for the Tour,” he continued.

“I was training for more than two weeks at our altitude training camp getting ready for the climbing. Let’s hope I can find my legs, if not here then for the Tour.”

Speaking of Thomas’s crash, he said: “I know where it happened, it was a really fast bend. I know G can fight for the win in this race. Let’s hope he’s all right and there’s nothing serious.

“Both Geraint and myself we came here to see how the shape is growing before the Tour. It’s an advantage to win the prologue but the hardest stages are at the end of the race – four mountain finishes, four really hard stages and a team time trial.

“For sure we are looking forward to racing hard, but at the moment I just want to enjoy this victory.

“I had my birthday yesterday and as well this is maybe the last time trial in the national champion’s jersey.

“Of course I will try to defend it at the national championship in a couple of weeks, but it’s always a nice feeling.”