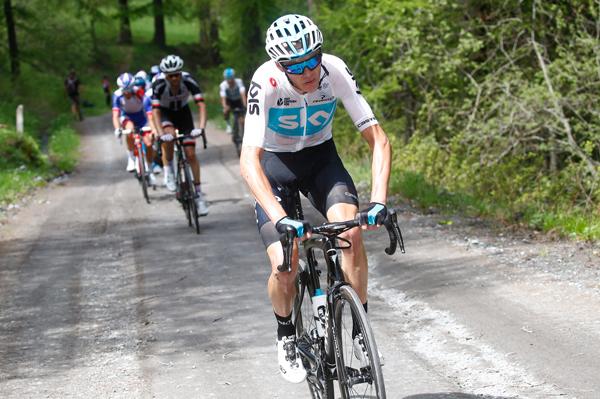 George Bennett’s comment that Chris Froome “did a Landis” on stage 19 of the Giro d’Italia was “not an insinuation, but a way to express admiration for an exceptional achievement,” according to his team, LottoNL-Jumbo.

Froome attacked with 80km to go and rode solo to the finish over three major climbs. Questioned at the finish while warming down, Bennett, in ninth place overall, was unaware that the attack had been successful.

“Did Froome stay away?” he asked his interviewer.

Informed that the Team Sky rider had ridden his way into the pink jersey, the Kiwi gave an astonished, “bullshit,” and followed that up by proclaiming,“he did a Landis.”

Most will take that as a reference to Floyd Landis’s infamous 120km solo breakaway on stage 17 of the 2006 Tour de France, a day after losing eight minutes to his rivals. A post-stage doping test turned up traces of synthetic testosterone in his urine and he was subsequently stripped of the overall win.

Aware that likening Froome to Landis could be taken as somewhat inflammatory, LottoNL-Jumbo later clarified: “Disclaimer to avoid any misinterpretation: this is not an insinuation, but a way to express the admiration for an exceptional achievement. Congratulations to Chris Froome and Team Sky.”

Disclaimer to avoid any misinterpretation: this is not an insinuation, but a way to express the admiration for an exceptional achievement. Congratulations to Chris Froome and Team Sky. https://t.co/2CkQXXoTCd

Speaking after the stage, Chris Froome said: “I’ve had difficult moments in the Giro so I had to try something crazy. We took this tactical decision last night together with our nutritionists because there was a need for a good fuelling strategy for that and for how the guys would execute the orders.”

Dave Brailsford elaborated on this in an interview with Eurosport, saying it had always been the plan to attack on the Colle delle Finestre.

“We thought that it might be a little bit too far out but you had the 27 hairpins at the bottom and we thought that was where we were going to put things on the line and split things up and make things really hard.

“If someone’s not quite on a good day then they’re going to pay for it there. It gave us a morale boost when Simon [Yates] was unfortunately dropped and stage two was to get rid of Tom [Dumoulin]. We decided that on the gravel roads that that was where we were going to do that.”

He continued: “This day is a lot about the staff and the fuelling, making sure that you can fuel a ride like this all the way to the end – that is fundamental.

“So every member of staff, myself included, was out on the side of the road to put in place a fuelling strategy for him to make sure that he wouldn’t miss a beat. That was the game changer.

“We tried to segment it up. You know how much someone is going to burn and you know how much they’re going to need to put back in, then you know where you need to eat and you can figure it out. But then you’ve got to make that happen and put it into practice.

“Knowledge isn’t the thing, it’s the practical stuff of making things happen, and thankfully the staff got out today and made it happen. They did a fantastic job, every single one of them and he delivered.”

Froome said the key to his ride was reducing the group of favourites such that everyone had to make a similar sort of effort.

“I knew the Finestre really well since I had a training camp in the area last year. I knew how to pace myself correctly. It was also a calculated risk. If there was not a big group behind me and other teams didn’t have domestiques, the GC riders had to make the same efforts as me.

“I was getting time checks from the motorbikes and via radio. I was 20 seconds from the Maglia Rosa for a long time. What I didn’t know was whether Tom Dumoulin still had good legs but I got the feeling that everyone was at the limit. It was raw bike racing.”