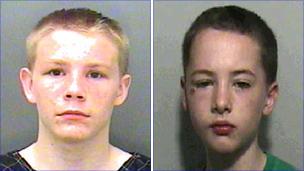 Dewhurst, left, has been recaptured, police continue to search for Thomas

One teenager recaptured, other still at large
by Mark Appleton

In what must be one of the most unusual escapes from incarceration ever seen in Britain, two young offenders absconded from custody on mountain bikes during a cycling proficiency test.

The BBC reports that on Wednesday, Connor Dewhurst, 14, from Blackburn, and Sam Thomas, 13, from Blackpool, made good their escape from custodial sentences at Barton Moss Secure Unit in the Eccles area of Salford.

The pair were part of a group of five undertaking the training when they made the apparently snap decision to pedal to their freedom. Dewhurst, who was in custody for assaulting a police officer, has now been recaptured and the police are appealing for information as to the whereabouts of Sam Thomas, who was convicted of robbery.

Speaking before Dewhurst was located, councillor Margaret Morris, Salford City Council's lead member for children's services, said: "The teenagers were taking part in a supervised course when it appears they made a 'spur of the moment' decision to abscond.

"We will of course look at whether anything more could have been done to prevent this, but our priority now is to work closely with the police to ensure the boys are found safe and well, as swiftly as possible."