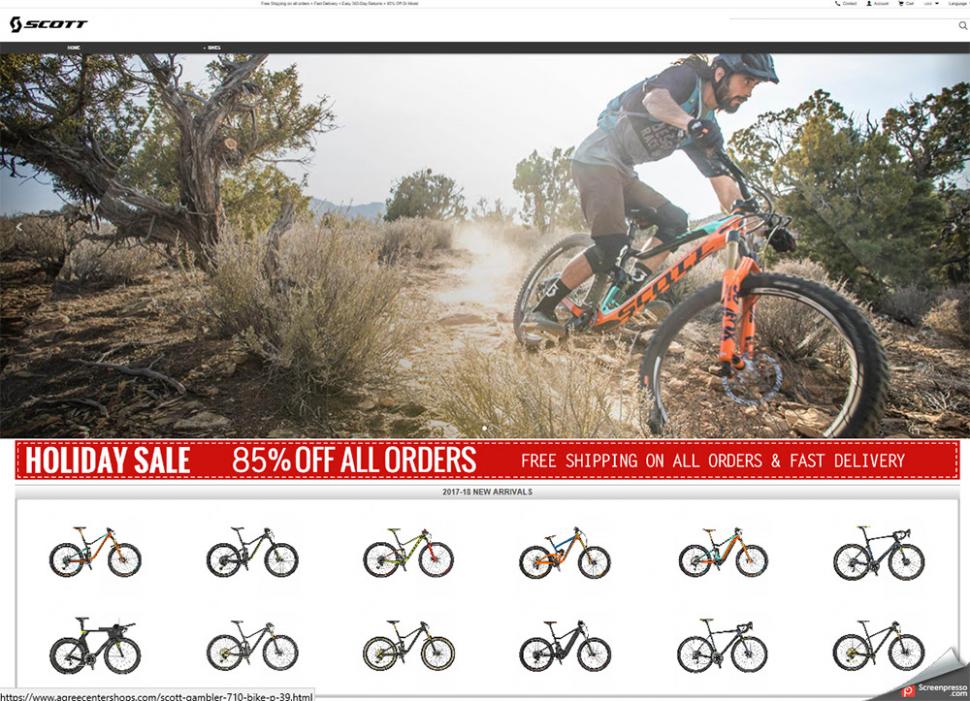 Rogue sites promise up to 90 per cent discount - but if you part with your cash, you'll be left empty-handed...
by Simon_MacMichael

Scott has warned consumers to be on their guard against fake online stores offering “too good to be true” deals on the brand’s bikes.

The Switzerland-based company has highlighted a rise in the number of such websites looking to lure consumers through social media channels including Facebook, promising discounts of up to 90 per cent.

Inevitably, anyone who places an order through such a site will be left disappointed – and out of pocket – when the bike fails to arrive, Scott warns.

While the business says that it acts quickly to have such sites shut down, it adds that the people who operate them simply change the URL while maintaining the design and layout of the earlier site.

Indeed, trade magazine BikeBiz, in a detailed series of articles published two years ago about counterfeiting in the cycling industry, compared attempts to shut down such sites to the fairground game, whack-a-mole.

"As an innovative brand, Scott is facing legal issues with product piracy and fake suppliers since quite a time, explained Scott brand director, Reto Aeschbacher.

“This is not something which is new at all. What is new indeed is the emerging number of well-organised online fake shops with criminal intent luring consumers to fraudulent websites which look quite authentic at first sight."

Scott says that the fake websites contain “imagery with up-to-date key visuals, a ‘real’ Scott logo, and deals which are too good to be true,” and that they may appear similar to the one shown in the picture above.

Tell-tale signs to enable consumers to spot them include “ridiculously low prices for Scott bikes (up to 90 per cent and cheaper),” the lack of distinction between different models, and a higher price – struck through with a line to emphasise the ‘bargain’– being shown.

As a result, it recommends potential buyers to only purchase through official dealers and to verify them beforehand through the dealer locator on its website.

As the BikeBiz series mentioned above makes clear, Scott is far from the only brand that counterfeiters prey upon, nor is such activity in the cycling market limited to bikes.

It isn’t difficult to find fake Oakley sunglasses on sale online, for example, while the BBC One TV show Fake Britain has looked at the measures that components brand FSA and bike helmet brand Giro have taken against people infringing their intellectual property.