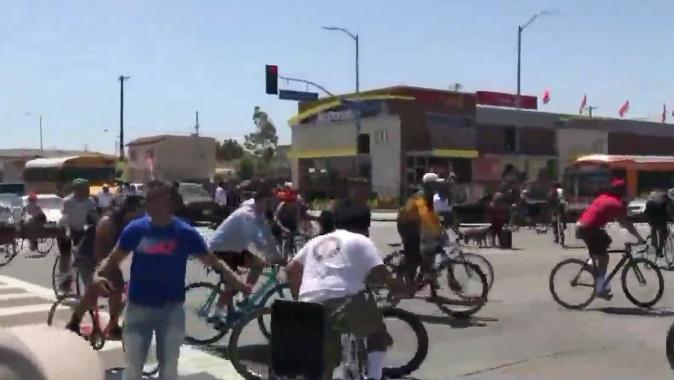 A man at a vigil for a cyclist killed in a hit and run was himself the victim of a hit and run in Los Angeles on Wednesday. KTLA reports that the incident took place at the exact same spot, a day after the cyclist was hit.

People had gathered at the junction of Normandie and Manchester avenues to remember cyclist Frederick Frazier, a 22-year-old who was killed after being hit by the driver of a white Porsche Cayenne who then fled the scene.

About 100 people were at the vigil and according to LAPD Captain Rafael Ramirez, "basically took over the intersection."

The female driver of a gold Toyota sedan first tried to push through the protestors and then got out and can be seen in footage slapping at least one cyclist.

According to Ramirez, a police officer came across the scene at around this point and several protestors attacked the car, throwing their bikes at it and kicking and punching it.

In the ensuing melee, the Toyota driver again tried to get through the junction and then eventually just started driving, hitting a pedestrian, who went flying.

The victim was Quatrell Stallings, a friend of Frazier’s, who had apparently been trying to help keep the gathering under control and was at the time helping a woman and her dogs cross the street.

Stallings was able to limp to the pavement but has since undergone surgery for injuries to his femur, knee and ankle.

The driver has not yet been tracked down. Ramirez said that she may have been afraid for her safety due to the size of the crowd, but that wouldn't excuse fleeing the scene of a crash.

"Hit and runs are already at an epidemic level in LA," commented Los Angeles County Bicycle Coalition Executive Director Erik Jansen. "When another happens during a vigil for a bicyclist killed the day before, when are elected officials going to do something for traffic safety? If not now, when?"