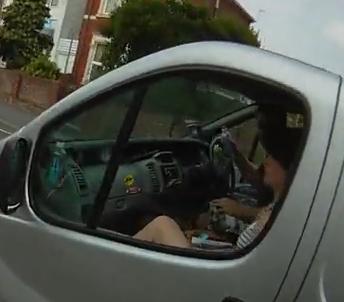 Bottle thrower fined, points on licence - are you aware of any precedent with cyclists' helmet cams?...
by Simon_MacMichael

In what is thought to be the first time that footage from a cyclist’s helmet camera has helped secure a conviction, a van driver has reportedly been cautioned for assault and charged with driving without due consideration, resulting in him being fined and receiving five points on his driving licence, according to the website iPayRoadTax.com.

In June this year, the website, which was founded to dispel myths about “road tax” – abolished in 1937, but which cyclists are regularly accused of not paying – highlighted a YouTube video in which a van driver and cyclist exchanged words after the cyclist was cut up, the incident ending with the driver throwing a bottle of orange juice at the bike rider before speeding off.

The whole incident was captured on the cyclist’s helmet-mounted camera, and you can also read the full exchange on the iPayRoadTax website. The footage was subsequently taken down from YouTube, with the anonymous cyclist, whose YouTube user name is idontpayroadtax, telling Carlton Reid, the founder of iPayRoadTax, that the driver had been reported to the police and he did not want to prejudice the case, which has now been decided.

Although there are a large number of cyclists who post helmet cam footage of bad driving they witness on their rides, including road.cc user Joby Spragg, we believe this is the first time that footage from a cyclist’s helmet-cam has helped secure a conviction, although if you know of any such cases, we’d be glad to set the record straight.

However, away from cycling, private film from head-mounted cameras has been successfully used in evidence before. In 2008, in the first case of its kind, Darren Ingham from Salford was convicted of a public order offence and given a two-year supervision order after stopping on his bike to threaten and abuse two traffic wardens who were issuing parking tickets.

In the meantime, you can show your support for iPayRoadTax by sporting one of their pretty stylish jerseys made by Foska.