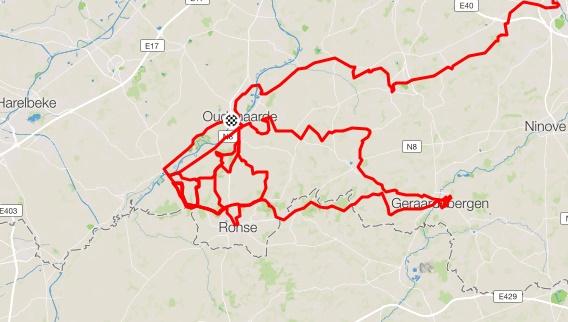 Niki Terpstra failed to secure a single KOM on Sunday – he didn’t even manage a top ten position. Fortunately, he salvaged a modicum of respectability by winning the Tour of Flanders.

Perhaps the Dutchman predicted the paucity of Strava glory, because he was in no great rush to upload his ride. (We checked at 5pm yesterday and it still wasn’t there.)

This may or may not have involved somewhere around 2,274m of vertical gain. The short, repetitive ups and downs of the Tour of Flanders do seem to highlight where riders’ devices maybe aren’t quite calibrated as they might be. For example, Alexander Kristoff’s Garmin Edge 520 had the route down as 1,227m while Greg Van Avermaet’s Edge 1030 said 2,554m. Quite a big difference.

Perhaps the main thing that Strava shows is the nature of the Tour of Flanders route. A flat-to-rolling first 200km is followed by a series of staccato peaks once the riders start twisting and turning and forever going back on themselves as the race seeks out all the famous cobbled climbs for the finale.