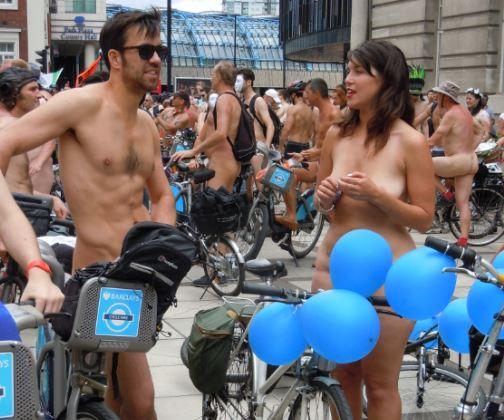 The 15th London edition of the World Naked Bike Ride will take place on Saturday 9 June, with thousands of cyclists in the capital – and in other cities across the UK this summer – set to rise to the challenge to ‘Go as bare as you dare’ to protest against oil dependency and car culture while highlighting the fragility of the human body.

Participation is free, and feeder rides are confirmed from Kew Bridge, Tower Hill, Regents Park, Hyde Park and Clapham Junction with an afterparty taking place at a venue to be confirmed.

To keep up to date ahead of the event, head to the WNBR London Facebook page.

Other cities around the UK where dates have been announced for this year’s rides are Portsmouth (2 June), Manchester (8 June), Cambridge, Cardiff (both 16 June), York and Chelmsford (23 June), Canterbury (29 June), Folkestone (30 June), Colchester (14 July) and Clacton (21 July).

Brighton is set to welcome the ride back on 10 June, although that is not fully confirmed, while according to the worldnakedbikeride.org.uk website, dates have yet to be announced for planned rides in Bristol, Edinburgh, Exeter, Newcastle-Gateshead, Scarborough, Southampton and Worthing.

As for the legalities of stripping off in public, organisers point out that "nudity is not illegal in England, as was established in the Sexual Offences Act 2003, but using nudity to intentionally cause harassment, alarm or distress may be illegal.

“Don't act offensively and you are unlikely to be arrested."

> Video: Woman taking tea at Bettys in York asks man to move - so she can get an eyeful of World Naked Bike Ride

One person who won’t be taking part in the London ride, however, is the comedian, Stephen Fry.