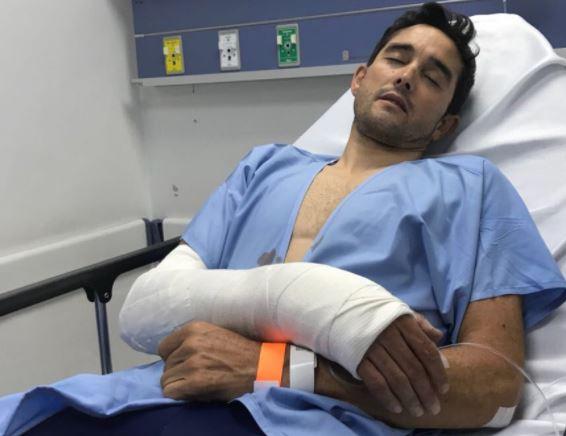 Spanish professional cyclist Oscar Sevilla has sustained a broken wrist after being attacked by muggers near Bogota, Colombia.

The 41-year-old, who was runner-up in the 2001 Vuelta a Espana when he rode for Kelme, has been based in the South American country for the past seven years and now rides for Team Medellin.

They confirmed that he had been assaulted while training to the north of Colombia’s capital this morning and his bike stolen.

His right wrist was fractured in the incident, and he is due to undergo surgery this afternoon at the at the Santa Fe Clinic in Bogota.

His team said his injury cast serious doubt on his planned defence in early May of the Vuelta a Madrid title he won last season, and which was one of his main targets this year.

Team Medellin also posted a picture of the stolen bike to Instagram and has asked for help in recovering it.

In 2013, Lampre-Merida pro Jose Sherpa suffered cuts to his face and back when thieves armed with knives stole bike as he trained in Colombia, his native country.

Sevilla, who finished seventh overall at the Tour de France in 2001, spent six seasons with Kelme before joining T-Mobile in 2005.

The following year, he and team mate Jan Ulrich were dropped from the T-Mobile team on the eve of the Tour de France after being linked to Operacion Puerto.

The pair were subsequently suspended by the team, effectively terminating their employment.

Sevilla joined Relax-GAM the following year then Rock Racing from 2008-10, since when he has ridden for UCI Continental teams based in Colombia.