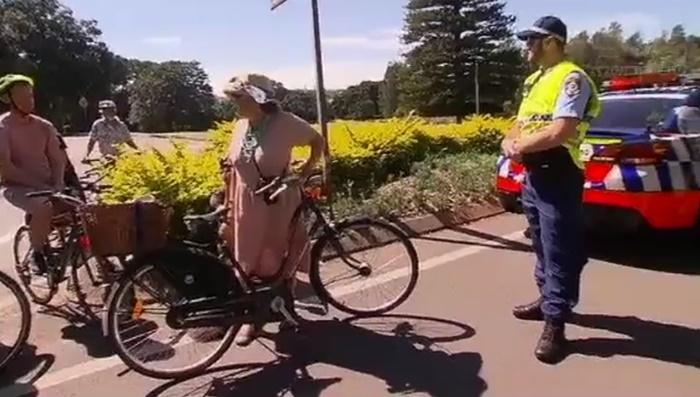 Cyclists have been riding without helmets across Australia today in protest at mandatory helmet laws they believe are discouraging people from cycling. The Sydney ride was closed down by New South Wales Police with long-time bike helmet reform campaigner Sue Abbott picking up yet another fine.

In 1991 Australia became the first country to require cyclists to wear helmets.

Alan Todd, the president of Freestyle Cyclists, which organised the protests, told the Guardian: “We find that the mandatory helmet law is the single greatest barrier to the uptake of bicycle use in Australia. It has created an image of cycling as a high-risk activity, and practically killed off the casual everyday use of the bike.”

On its Facebook page, Freestyle Cyclists reported: "A tale of two cities. In Melbourne, the Freestyle Cyclists Helmet Optional Bike Ride attracted zero police activity. Meanwhile in Sydney today, the bike hating capital of Australia (maybe the world), the police closed it down. Threatened with a $330 fine two people including long time bike helmet reform campaigner Sue Abbott took one for the team.

“Rides also took place in Brisbane, Perth, Adelaide and across the ditch in Wellington where police no longer prioritize the helmet law.”

There’s some Ten News footage of the Sydney ride.

Rudy Botha, who co-ordinated it commented: “With Sydney facing a lot of transport challenges, we need to be encouraging people to look at riding a bicycle as alternative.

“Threatening them with one of the world’s highest fines for something that is considered normal in most countries, is having the opposite effect.”

Todd added: “We accept that a helmet might help in the event of an accident … [but] you must distinguish between crash data and population data. It hasn’t had any measured safety benefit at the population level. Across population, the reduction in injuries was no more than the drop in cycling.

“It beggars belief that in the 21st century we take something as benign and beneficial as bike riding and we punish people.”

Edward Hore, the president of the Australian Cycle Alliance, expressed support for the protests.

“If you’re in a peloton down a beach road, and you’re not wearing a helmet, you’re a bloody idiot, let’s be frank. But we’re talking about the rider in the park with a family, the local commuter, the gentle ride down the street. Once you’ve measured your risk you can decide whether or not you want to don a helmet.”