Retro vs modern: comparing a vintage steel racer with a modern machine on the Eroica Britannia route

We recently attended the launch for Eroica Britannia’s new Eroica Nova, a separate ride over the Eroica weekend which allows the use of modern bikes; so we tried out some of the course on modern and retro rides to see what the difference was...
by Jack Sexty

Recently I was lucky enough to head out to the Peak District and preview some of the new route for the Eroica Britannia. The Classic routes have been altered to omit some of the more hair-raising descents and improve safety, and they've also added the new Eroica Nova sportive which allows the use of modern bikes.

For those of you unfamiliar with the L’Eroica, it began in the Tuscan region of Italy 21 years ago now and is a true celebration of cycling vintage. Today there are events in the USA, Spain, Uruguay and here in Britain, where it’s took place in Derbyshire's Peak District since 2013. L'Eroica is also pretty unique because it actually spawned its own pro event in 2007, the Strade Bianche, a prestigious world tour race that's been won three times by none other than Fabian Cancellara. 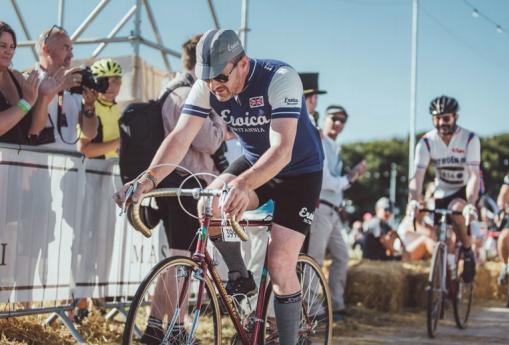 The Eroica Britannia rides are pretty non-competitive sportives, with 100 mile, 55 mile or 30 mile options. There’s plenty of elevation and a mix of gravel and tarmac which is pretty tough going on a steel frame with skinny tyres, it’s definitely not for the faint-hearted. Your bike has to be from pre-1987 primarily - that means downtube shifters only, toe clips, rickety old handlebars with little to no grip and painfully skinny tyres considering the treacherous terrain the Eroica is run over. Of course retro kit is highly encouraged, meaning lycra is out and wool is very much in.
The event runs over a whole weekend and retains a festival feel, taking place over three days with plenty to see and do in the event village. On route you can indulge in the local Derbyshire delicacies such as the famous Bakewell Pudding, and even have a cheeky beer or two at one of the feed stations so I'm told (not that we’d condone that). Our press trip consisted of two days of riding. On the first day we did a 50 mile ride which took in plenty of the Eroica route highlights, and for this we were using modern bikes. Given the terrain and the fact it was late January, I opted for what I thought would be the most appropriate bike for the job, and that happened to be a Mason Definition2 that I've just reviewed. It's got a sturdy triple-butted aluminium frame handbuilt in Italy, grippy 30mm Schwalbe tyres and hydraulic disc brakes, basically everything you'd want for a mixed terrain ride over the Peak District. For the vintage day we rode a shorter and less gnarly route, which was welcomed by me especially because I think I’ve only ever rode a bike with downtube shifters maybe twice, and both times this was just a quick spin. All of us on the trip were assigned a retro bike each, hired out by The Vintage Bike Shed. The owner Andy is based in Stoke-on-Trent and gave us a bit of history about the bikes, one of which Chris Boardman rode at last year’s Eroica Britannia, and each bike had a little bit of a unique story behind it. The one I was riding was a handsome purple steel racer from Dave Quinn, who we didn’t know a great deal about until my colleague Pat mentioned that he actually used to deal with him years ago while working for a distributor. We know he had a bike shop in Chester under his own name and believe he now runs a shop called The Bike Factory. (If we're mistaken, do tell us more in the comments!) The bike had loads of classic features, like Reynolds 531 steel tubes, old school Mavic rims and Weimann brakes, the latter of which I'm told are pretty sought after by hipsters in Shoreditch nowadays. They really flared out at the front and I found them pretty difficult to access, however if you're unhappy with the position they can apparently just be bent into shape! I lucked out with tyres as I had 23mm’s, some of the others were on 19’s or 20’s which I'm told were pretty horrendous on some of the more gravelly tracks we rode on. The Quinn was 7-speed (Shimano 105 80's styley) and had 52-42 chainrings with a 28 cassette. For me, being used to compacts and quite a lot of choice when it comes to gear ratios, I’m just perplexed as to why you’d have a 52/42. It basically means you've got a massive smallest gear and a not very big biggest  gear. On the plus side though, when you change the front mech you barely notice anything as it’s not really much of a drop... 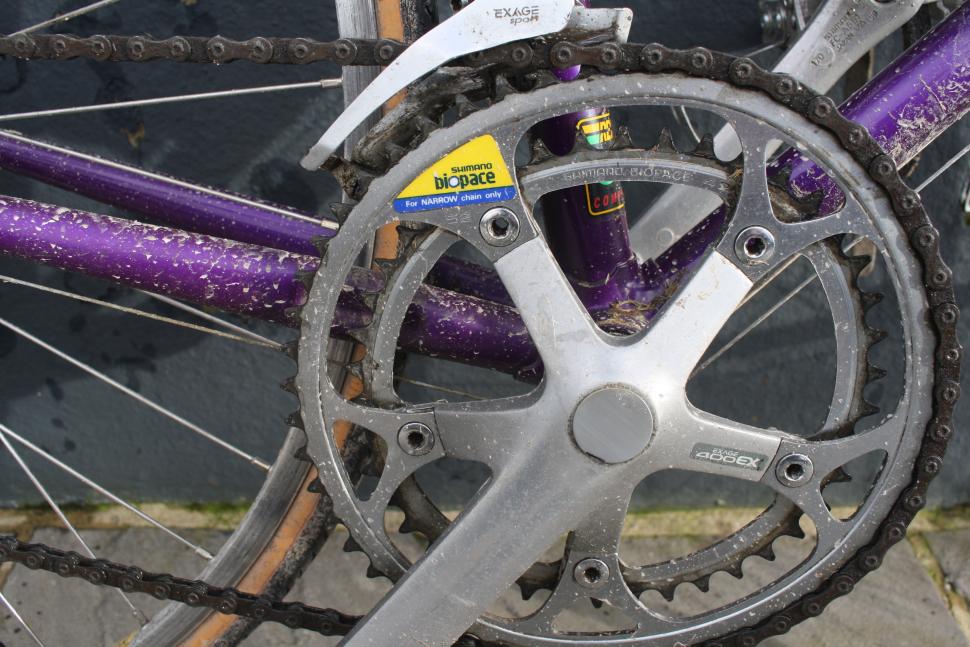 One of the more intriguing features was the Shimano Biopace chainrings. If you don’t know about these, they’re some of the first asymmetric oval chainrings, launched by Shimano in 1983. They’re supposed to eliminate deadspots in your pedalling stroke and seemed like a good idea at the time, but they were quietly discontinued in the early 90’s as there wasn’t really any evidence they were beneficial. Some riders reported knee problems and a bit of a drop through the pedal stroke, which I concur feels a bit weird to begin with (read John's guide to Shimano and Campag's biggest design blunders for more info and similar vintage fails). That said, there are still plenty of oval rings out there now and even Chris Froome uses monster-sized ones on his time trial bike, so the idea wasn’t totally consigned to history.

After a wobbly start I got used to the shifting a mile or so down the road, but some of the bumpier sections were just savage and I felt every vibration. Bikes like this one just aren’t really equipped to ride on anything but tarmac, and I definitely felt every jolt when the ride route went off the beaten track.
As you’d expect the braking was just nothing compared to the disc rotors I’m used to, even though the levers looked nice which is what counts I suppose. I also just could not get used to how skinny the handlebars and brake hoods were and my hands were killing me after about 20 minutes, I’ve definitely been spoiled with modern oversized bars and plush bar tape.
Despite the minor moans and although the ride experience was markedly different on the retro bike, I did enjoy it a lot. It was just different and not necessarily a whole lot worse. Obviously things like the brakes and the shifting aren’t nearly as good, but when you’re on a nice stretch of flat road or even climbing, after a while it’s just like… well... riding a bike! So what conclusions can I draw from this if any? Well first off, hats off to all the hardy cyclists of an era before my time who were fiddling down by their knees to change gears! Based off my experience I’d also have had permanent bruising on the inside of my palms. And of course, chapeau to everyone who’s conquered an Eroica, because based off the test rides we did on that couple of days, it’s bloody tough going and definitely not to be sniffed at: this is a proper challenge.

Inspired by the all the retro goodness I’ve already got myself signed up for the Eroica Brittania this summer, and have even pre-booked the Dave Quinn purple Biopace beauty – although I have requested a bit of extra bar tape! As someone who got a pretty late start to road cycling I’m kind of learning about bikes backwards in a way, and I guess this really is the spirit of Eroica events. It allows relative newbies like me to learn a bit about the history of cycling, the fashion, the bikes of yesteryear, and for everyone who was there to celebrate the bygone eras of our sport...

We’re also running a special Eroica Britannia comp at the moment, giving away two ride passes, festival and camping tickets plus all the kit you’ll need to look the part during the ride. Click here to get your entry in!