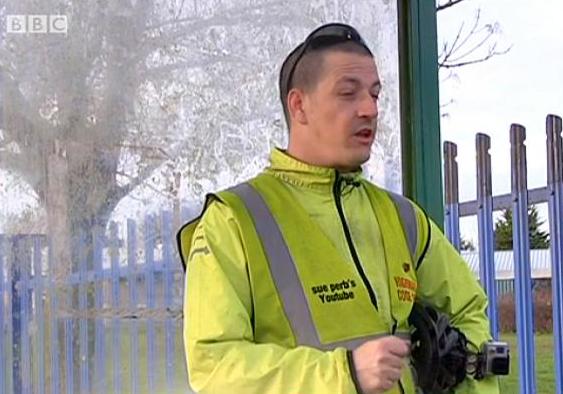 “I thought I was going to die,” says man once described as 'Britain’s most hated cyclist'...
by Simon_MacMichael

Dave Sherry, once described as “Britain’s most hated cyclist,” has said he thought he was going to die when an overtaking lorry driver knocked him off his bike.

> Video: 'Britain's most hated cyclist' films driver who appears to be reading newspaper at the wheel

Sherry, who has also been called a “vigilante” due to footage from the cameras attached to his bike leading to dozens of drivers being convicted of road traffic offences, filmed the harrowing moment the lorry driver cut in on him as the London bus driver cycled home through Epping on 11 January.

The footage has been published on the Metro.co.uk website, with the lorry driver swerving towards the 40-year-old to avoid an oncoming car, leaving the cyclist with nowhere to go and the rear of the trailer sending him hurtling to the ground. The driver reportedly failed to stop at the scene.

“As it [the lorry] moved back over to the left it knocked me off my bike,” Sherry told Metro.

“The oncoming car was sounding its horn and flashing its lights, so the lorry pulled back and narrowly missed that head on.

“I heard it revving its engine again, so I gestured for it to stay back because I could see the oncoming traffic, but it overtook me regardless.

“As it moved back over to the left it knocked me off my bike. I honestly thought I was going to die.”

Sherry lost skin on both of his arms in the incident and was treated in hospital for his injuries.

“Amazingly there was an ambulance coming towards me, so they picked me up right after and took me to hospital,” he explained.

“My bike appears to be a write-off, both cameras are broken and all of my lights.”

He added: “As a bus driver and a cyclist I thought I understood just how vulnerable some road users are, but after this incident I can see how easily and quickly cycling fatalities can happen.

“I’m still in a lot of pain at the moment, but despite my apprehensions I will get back out there.”

Sherry’s videos have led to him appearing on national television in debates about the use by cyclist of video cameras to catch law-breaking drivers, and is not afraid to confront motorists he believes are breaking the rules of the road and tell them he will report them.

Last year, that led to a van driver he had filmed using a mobile phone at the wheel putting him into a headlock and allegedly threatening him with a torch – an incident that was captured on film by Sherry.

Police were called to the incident on Leyton High Road last June, in which Sherry appeared to have taken the van’s keys from the driver who in return seemed to have seized the cyclist’s camera, but said afterwards that they were satisfied no offences had been committed.

> Video: White van man puts helmet cam cyclist Dave Sherry in a headlock and allegedly threatens him with a torch