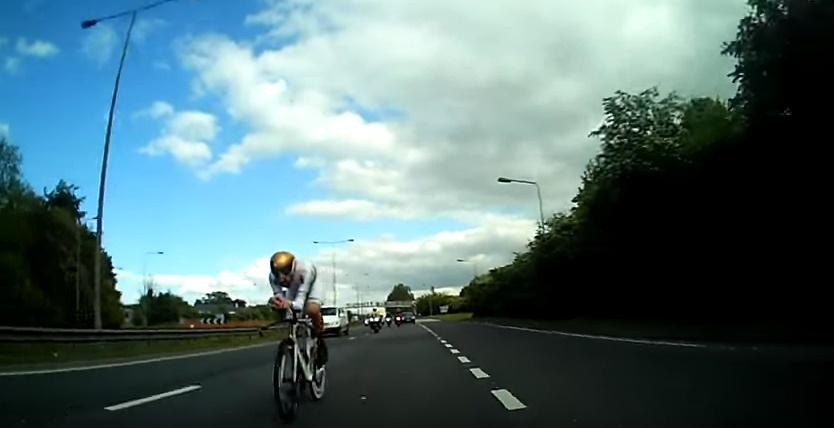 Bradley Wiggins on the A63 (via YouTube).jpg

Highways England is reported to be proposing a ban on cyclists using a stretch of one of its roads near Hull. The A63 Trunk Road forms part of the V718 course on which Marcin Bialoblocki set the 10-mile time trial record of 16m35s in 2016, but Highways England wants all cyclists excluded for safety reasons.

Writing on the Hull Thursday Road Club Facebook page, Club Time Trial Secretary Paul Kilvington said that he had received a number of reports that Highways England was proposing a Traffic Regulation Order to ban cyclists from the A63.

He later posted a copy of the document.

In a ‘statement of reasons’ Highways England writes:

“Concerns have been raised for the safety of cyclists using the A63 Trunk Road between North Cave Interchange and Daltry Street Interchange. Cyclists are travelling on a carriageway that carries average speeds of 65mph for traffic, at a rate of over 2,500 vehicles per hour. In the last 5 years there have been six accidents involving cyclists, including a fatality in 2013.

“In the interest of road safety, Highways England Company Limited is proposing to ban cyclists on this stretch of road, including the associated slip roads.

The document states that the consultation period closes on February 19.

In 2013, a coroner’s court returned a finding of accidental death after a rider in a time trial died following a collision with a stationary caravan on the A63.

Christopher Auker, 65, riding in a tuck and looking downwards, realised the danger at the last moment and was unable to avoid hitting the caravan, whose driver had pulled over after a puncture. He sustained head, spinal and thoracic injuries and died at the scene.

Speaking after the incident, Auker’s widow Elizabeth said: “Neither Chris nor I had any worries about this course – we both felt time-trials were safer on a dual carriageway where there is room for traffic to overtake.

“This was a freak accident that could not have been foreseen and nothing to do with the time-trial course.”

In 2015, then World Time Trial Champion, Sir Bradley Wiggins, rode Hull City Road Club’s 10-mile time trial on the A63. Footage of him riding the course can be seen here.