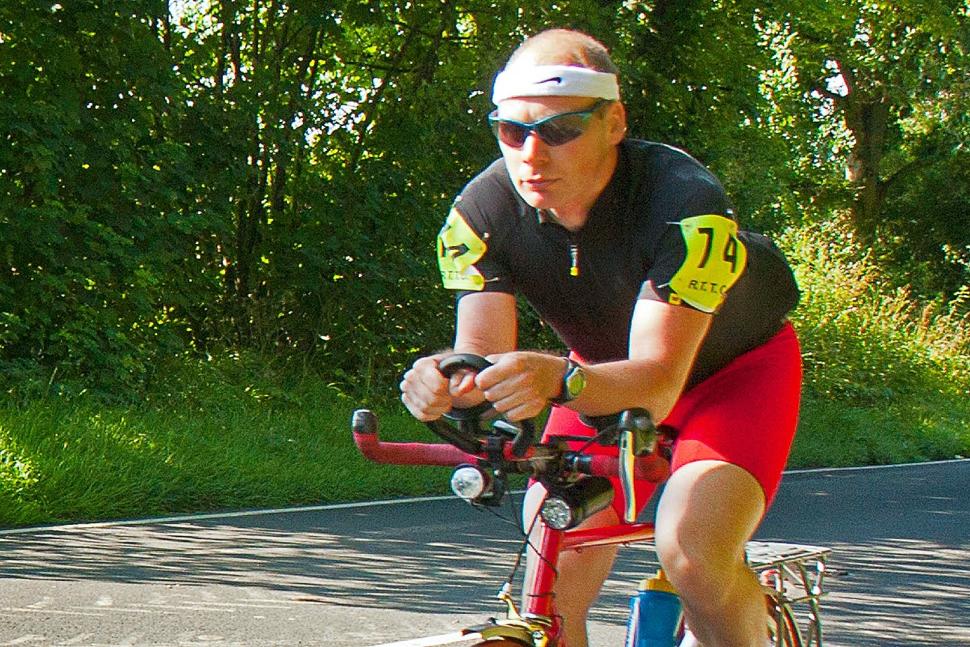 Steve Abraham back riding after driver knocks him off bike

Steve Abraham, who is nine and a half months into his latest attempt on the Year record, is back riding his bike after being hospitalised earlier this week when a motorist struck him from behind.

In 2015, the ultracyclist was forced to abandon his first attempt on the record after a moped rider crashed into the back of him, with the cyclist sustaining a broken ankle.

Fortunately, his injuries are less serious this time.

The Milton Keynes-based rider posted on Facebook: “I was hit from behind by a car. Just a glancing blow, rather than a direct hit. Took the wing mirror clean off.”

He continued: “Right hand side of my drop handlebars is now more like an extra tri-bar. Probably lucky I was on the tri-bars at the time.

“Not much more than superficial wounds really. Walking is uncomfortable, not in any pain if I am resting and I should be OK in 72 hours, according to the doctor.

“Been checked out and X-rayed and nothing broken. Swelling seems to be going down very quickly. I've just been eating and sleeping today.”

Regarding the incident itself, Abraham said: “So, I was hit and found myself lying at the roadside with my right leg tangled in bent up handlebars and in shock.

“I untangled myself and a passer-by stopped and phoned the police. The person who hit me did stop.

“Ended up waiting at the roadside for about an hour in freezing temperatures (having now checked my ride on Strava, it was 32F or 0C, so literally was freezing), covered in blankets and going into hypothermia.”

He added: “It got tough when my temperature went down to 34 degrees and it went as low as 33.

“As I've had people ask what my resting pulse is, it went down to 37bpm when I was in hospital and warmed up again.

“It gave the medic a fright until I told him I cycle about 200 miles a day. I even got a free sandwich.”

Abraham was back riding his bike on Friday and in a post to Facebook today, he wrote: “My injured leg was feeling stronger yesterday. I was aiming for 300km (186 miles) and did 178. I stopped a bit early because the roads were freezing up.

Abraham’s latest record attempt started on 4 March and according to the website of the Ultra Marathon Cycling Association, up to and including 12 December he had ridden 58901.5 miles.

That gives a daily average of 207.4 miles, a little below the 208.4 miles a day that Kurt Searvogel managed when he set the current men’s Guinness World Record for the greatest distance cycled in a year by a male of 76,076 miles, breaking Tommy Godwin’s record set in 1939.

The overall record is held by Amanda Coker, who in May completed her year of riding with a distance of 86,573 miles with a daily average of 237.2 miles.

She went on to become the fastest cyclist ever to reach 100,000 miles which she achieved in 423 days, smashing by 77 days the record established by Godwin as he kept riding after establishing his year record.