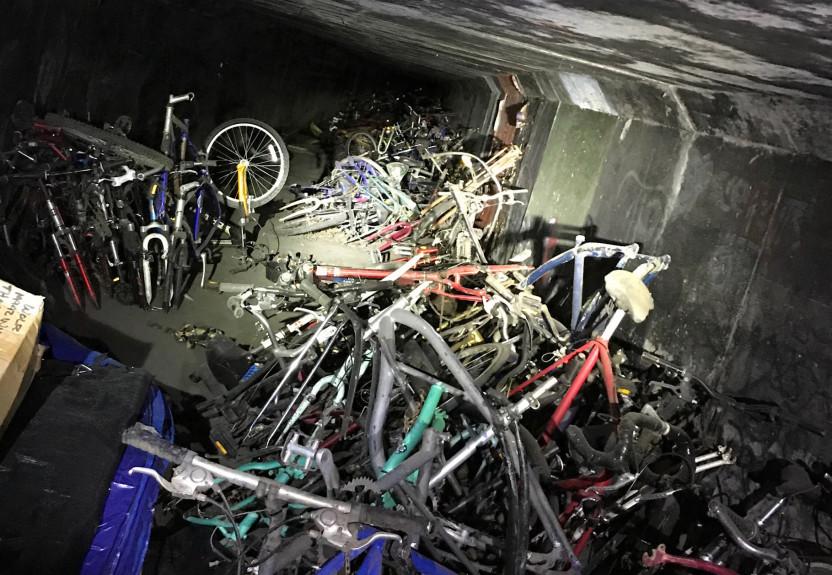 The discovery of more than a thousand bikes in an underground bunker in California has led police to suspect a large scale organised programme of theft.

Officials clearing a homeless encampment in Orange County discovered several bunkers that appeared to be built by amateurs, one full of more than a thousand bikes.

They were found in the tunnel system under the concrete flood control channel of the Santa Ana river.

The Orange County Register reported that one underground bunker had wood-panelled walls and a support beam, and was accessible only via a hatch camouflaged to blend in with its dirt surroundings.

A gun was also found at the location, with three spent casings.

Nearby San Francisco has such an epidemic of bike theft that one bike is now being stolen every three hours.

“There was a malicious attempt to associate this stash of bikes with the removal of the Fountain Valley encampment,” homeless advocate Mohommed Aly told the paper. .

“The Sheriff’s Department has an incentive to portray the most vulnerable members of our community as criminals. It’s difficult for people not to lose empathy when law enforcement is misrepresenting the facts.”

“A reasonable person is going to assume it’s the homeless, but we don’t have any evidence to back that up,” said Sheriff’s Lt. Jeff Puckett, adding that the investigation is ongoing.