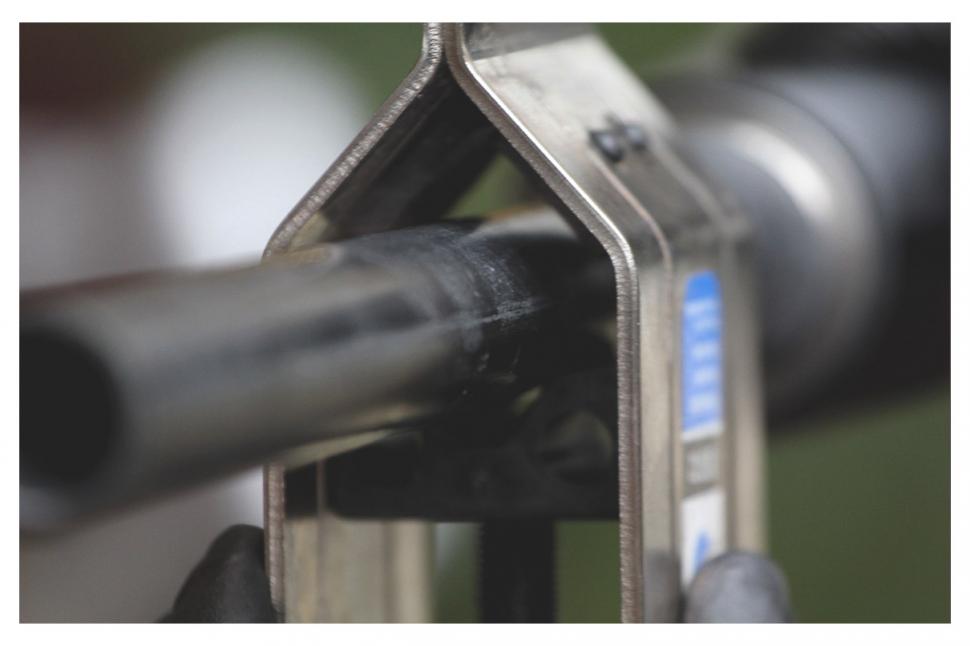 Cutting a steerer? Maybe wear a mask
by Alex Bowden

If you’ve ever needed to trim a carbon fibre steerer tube, the thought may already have crossed your mind. Researchers at the Medical Research Council Toxicology Unit believe that certain carbon nanotubes (CNT) used in manufacturing could pose the same cancer risk as asbestos.

According to the study, published in Current Biology, “Manufactured carbon nanotubes (CNTs) are similar to asbestos in terms of their fibrous shape and biopersistent properties and thus may pose an asbestos-like inhalation hazard.”

The researchers found that both long CNTs and long asbestos fibres in the pleural cavity of mice induced mesothelioma, a type of cancer that develops in the lining that covers the outer surface of some of the body's organs.

It is the first time the mesothelioma-causing effects of long and thin carbon nanotubes have been monitored in mice over many months.

“Long, thin nanotubes have a very similar structure to asbestos,” said Professor Anne Willis, director of the MRC Toxicology Unit, speaking to European Pharmaceutical Review. “The immune system does a good job of recognising shorter, thicker or tangled up nanotubes. Special cells break down these types of fibre and clear them out of the body, so not all nanofibres pose a hazard.”

This begs the question of what kinds of nanotubes are likely to be found in bike parts.

Benedict Pfender, who produced our ultimate guide to frame materials, says CNTs aren’t widely used in the bike industry yet.

“There’s still a lot of issues with large scale production of CNTs and controlling them for production. In terms of CNT use, it seems the only real application is as a toughener/strengthener for the matrix material in carbon composites – however it’s not super clear how widespread this is in the industry.

“However, we must also consider the safety of working with carbon fibre itself. Obviously cutting a steerer generates some dust – though I would be inclined to say that it’s not likely to be of an amount that will be of particular concern.

“All of these health hazards are about exposure and increasing risk with increasing exposure. Sawdust (wood) can be hazardous if you breathe in enough of it. Cutting a steerer is not really going to generate much debris – just do it in a well ventilated environment.”

Pfender says that cutting and sawing are likely to produce larger particulates, whereas the fine debris from sanding or grinding would be more worrying.

He adds that even if CNTs are present, it’s likely that a lot of them would remain “suspended” in the matrix material when cutting. “However it’s very difficult to say and it doesn’t seem a huge amount of research has been done into this.”

He concludes: “Long story short, it’s hard to say how much of a specific risks CNTs pose without knowing which manufacturers are using them. It may be worthwhile to wear even just a simple (and cheap) paper mask when cutting a steerer to protect yourself from the dust produced and to do it outside/in a well ventilated environment.”

Reflecting on the study, Professor Willis expressed her hope that the onus wouldn’t be solely on the consumer to know and understand the risks: “We want our research to inform manufacturers and regulators about safer options and contribute to a ‘Safe by Design’ approach when a nanofibre is being selected for the production of nanomaterials for emerging technologies.”