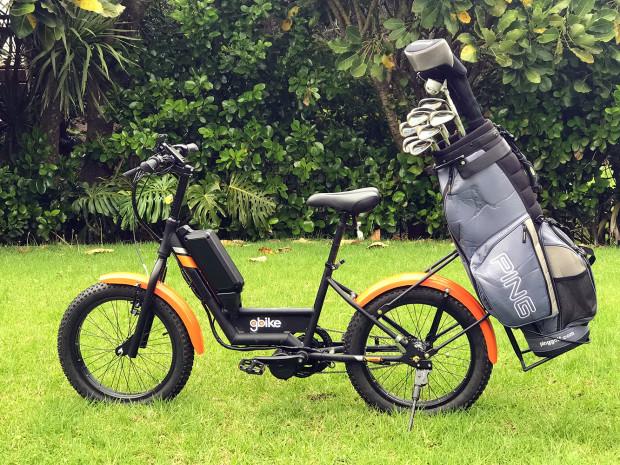 No longer a good walk spoiled...
by Sarah Barth

They say golf is the new cycling, but what if you wanted to combine the two?

A new startup aims to get golfers round the course faster by getting them on two electrically powered wheels.

As Mark Twain's saying goes, golf is a good walk spoiled, so why not ruin a cycle ride instead?

Eileen Harrison, the former magazine publisher behind gBike, a startup aimed at selling electric bicycles to golfers, says she took her  inspiration from American oil magnate John D Rockefeller, said to be the first golfer to cycle round his 18 holes.

Harrison also took notes from her 77-year-old father, who as a keen golfer also got into mountain biking in his 70s.

He designed a special golf bag to be carried on his bike, and patented the idea.

Eileen told the Times: “It quickly became clear that one needed to be ‘golf bike fit’ and that some people using the golf bike would not necessarily have the required fitness,” she says. “It was at this point that we decided to make it an e-bike. That way, with the pedal assist, fitness was not a requirement.”

The bikes, known as gBikes, are hand made in New Zealand, and are crowdfunding on Indiegogo to set up a larger production facility in Detroit.

They are designed to work with any golf bag.

It works in either pedal assist or fully electric mode, or, if your battery runs out, on pedal power alone. The early-bird price is $2,999 plus $200 shipping and the estimated delivery time is next June.