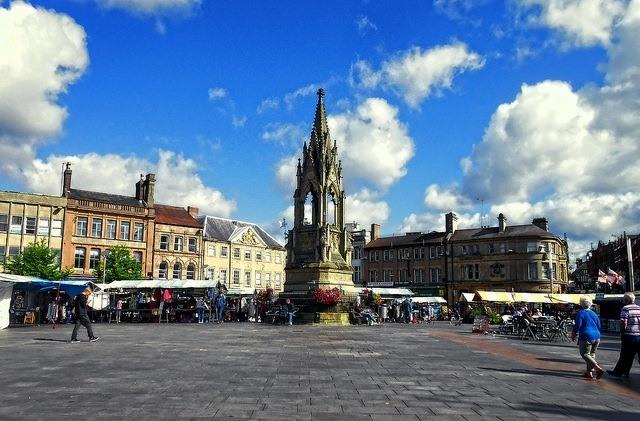 Message that “people on bikes aren’t welcome in Mansfield” is reinforced by the fine, says Cycling UK
by Simon_MacMichael

A cyclist caught riding his bike in Mansfield town centre, where cycling is banned under a Public Space Protection Order (PSPO), has been ordered by a court to pay almost £600 in fines and costs, with Cycling UK saying that it reinforces the perception that “people on bikes aren’t welcome” there.

Christopher Cobb, aged 22, was spotted by a council neighbourhood warden heading on his mountain bike from Market Place to the Nottinghamshire town’s library, reports the Mansfield Chad.

He got off his bike after being told to do so, but 10 minutes later the same warden saw him riding on West Gate and given a fixed penalty notice in the sum of £100.

After failing to pay it, Cobb was summonsed to appear at Southern Derbyshire Magistrates’ Court but failed to appear and, with no plea entered, was fined £440 plus £100 costs and a victim surcharge of £44.

“There are alternative routes around the town centre or cyclists can act in a responsible fashion and get off and push their bicycles through the town centre.

“This cyclist had the opportunity to pay a much lower fixed penalty of £100 but chose to ignore it which is why he is now facing a much higher penalty as a result of the case having to go to court.”

Introduced last year in a bid to combat anti-social cycling, Mansfield’s PSPO received national attention in August after road.cc reported that Stage 4 of last month’s Tour of Britain was scheduled to start in the part of the town where cyclists are banned, with BBC News among the outlets that subsequently reported on it.

Last year, Cycling UK, acting through the cyclists’ defence fund, said it was supporting an appeal by six cyclists against the PSPO in what is believed to be the only legal challenge yet brought against a local authority in connection with the controversial legislation.

That appeal has not yet been heard, with the charity telling road.cc that the case has been adjourned since the Home Office were revising their guidance on PSPOs, and the circumstances in which they should be made, and because Mansfield Council were prepared to consult again, with a view to varying the PSPO.

That consultation has now been launched in response to the revised Home Office guidelines. It remains open until 25 October and Cycling UK is currently drawing up its response.

The council proposes changing the times the PSPO is in effect from 24 hours a day to between 6pm and 7am, as well as reducing the area to which it applies.

Duncan Dollimore, head of campaigns at Cycling UK, told road.cc: “A fine of nearly £600 for cycling in the town centre sends a very simple message: people on bikes aren’t welcome in Mansfield, unless of course the Tour of Britain’s coming to town for a stage start, when all of sudden cyclists aren’t a menace and a danger to pedestrians, but can be welcomed with open arms.

“Hopefully Mansfield Council will reflect on the reputation they’ve created for themselves as the town that doesn’t like cyclists, and consider the revised Home Office guidance on PSPOs during its new consultation on proposed variations to the existing bicycle ban,” he continued.

“They might like to ask themselves whether they’re really tackling anti-social behaviour, or just imposing a ban because they think they can.”