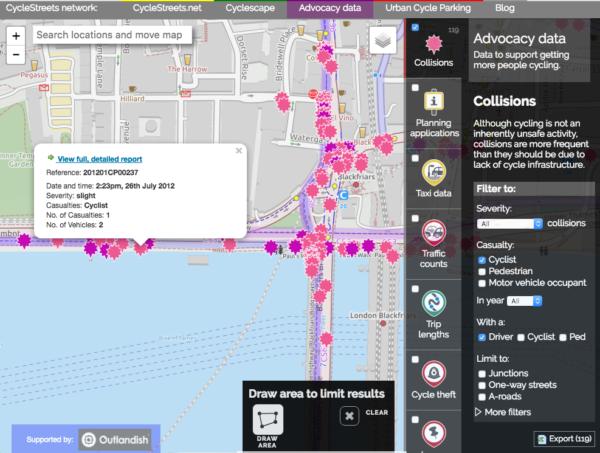 See every cyclist crash since 2005 on new CycleStreets maps

Building a solid factual case for improvements is important, says team behind map
by Sarah Barth

Every British cyclist collision since 2005 will be available on a map in a move campaigners hope will spur action from government.

Alongside the collisions, it will also show cycle parking, cycle theft, planning applications and traffic counts.

As BikeBiz reports, some teething trouble with the app appears to show collisions in the river Thames in London, raising questions about the accuracy of some of the data.

Coder Martin Lucas-Smith told the website: "We believe there's an offset error with the DfT's 2016 data which we reported, explaining those in the Thames.”

On their blog, CycleStreets wrote:

“Getting more people cycling means improving the infrastructure on our streets so that everyone, whatever ability or level of confidence, is able to cycle easily and safely.

“To achieve this, cycling campaign groups around the country work daily to make the case for cycling. They look at traffic consultations, propose changes to the highway, scrutinise planning applications, and work with local people and their local council to achieve these improvements.

“Getting changes on the ground involves both a solid factual case for improvements as well as making an emotional case. For instance, reducing speed limits to tame traffic relies on having good access to collision data to demonstrate that there is a problem.”

The company hopes to push on to include more data in maps, including pollution, taxis and school travel.