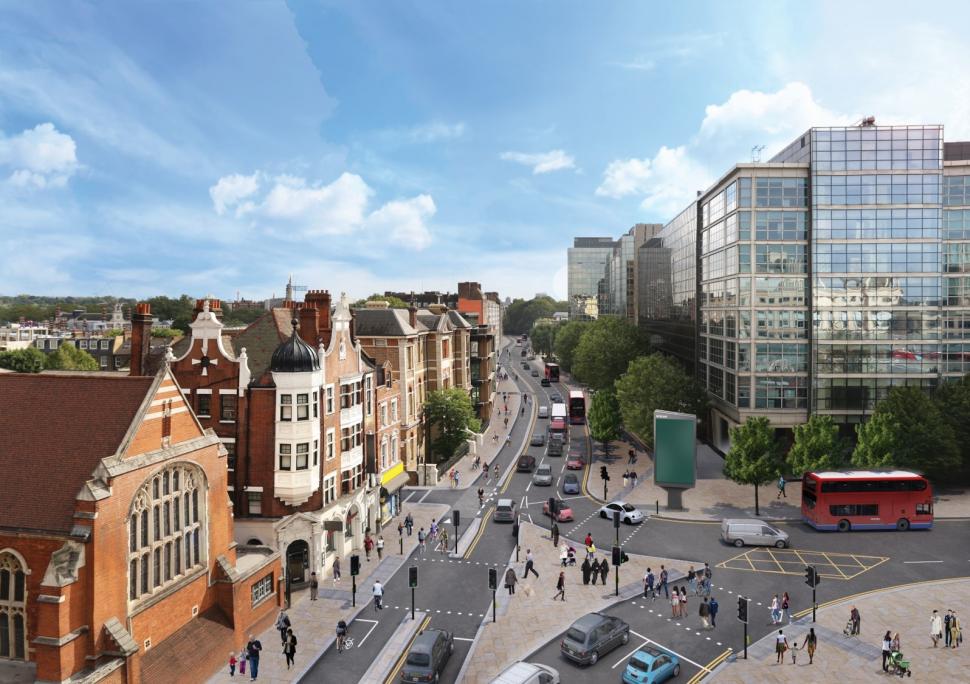 Mayor of London Sadiq Khan has launched a consultation for a Cycle Superhighway that will run from Kensington Olympia to Brentford and which will provide nearly six kilometres of protected cycle lanes for cyclists in West London – but it will not link at its eastern end to the existing East-West Cycle Superhighway, putting cyclists into conflict with motor vehicles on Kensington High Street.

It is planned that the route (overview map here) will ultimately be extended westwards to Hounslow, with a separate consultation on those proposals being held next year.

The mayor said: “As the capital continues to grow, it is vital that we encourage more Londoners to walk and cycle to improve health, productivity and air quality.

“That’s why I’ve set out bold plans to change the way we look at how our transport network and committed record levels of investment to improve cycling.

“This new Cycle Superhighway will bring a high-quality segregated cycle lane to west London for the very first time. It will make a real difference in encouraging Londoners of all ages and abilities to get on their bikes and improve conditions for pedestrians across the area.”

When he was elected mayor last year, Khan pledged to "make London a byword for cycling” but campaigners have at times expressed frustration at what they see as a lack of progress in building on the separated infrastructure introduced in the latter part of his predecessor Boris Johnson’s administration.

At the time Johnson announced his initial Cycle Superhighway programme in 2010, a route from Hounslow to Hyde Park was one of the routes proposed.

The one outlined today, however, will not extend eastwards along Kensington High Street to Hyde Park, where it would link to the East-West Cycle Superhighway.

That is likely due to the Royal Borough of Kensington & Chelsea’s longstanding resistance to separated cycling infrastructure, even though the section of the route through its territory would only be around 1.5 kilometres in length.

The new route passes by Kew Bridge, across the river from Richmond upon Thames, a borough with one of the highest proportions of cycle commuters in London, many heading to the West End and beyond.

The evidence from the protected Cycle Superhighways that have already been built is that they not only attract existing cyclists, but also release pent-up demand – and that means that missing link is likely to result in huge numbers of riders sharing the road with motorists along Kensington High Street.

Nevertheless, London Cycling Campaign (LCC) welcomed today’s announcement, with its infrastructure campaigner, Simon Munk, commenting: “This route will tame several dangerous junctions, enable far more people of all ages and abilities to cycle to local shops, stations and into work and extend the Cycle Superhighway network to areas where cycling demand is high but cycling infrastructure is virtually non-existent.

“It will help achieve the vision of a greener, healthier and less congested city set out in the mayor’s Transport Strategy and is a big step by the mayor towards fulfilling the commitment made to LCC members and supporters to triple the extent of protected space for cycling on main roads,” he added.

Will Norman, appointed by Khan as London’s Walking and Cycling Commissioner, earlier this year, said: “I’m delighted that we can today announce nearly 6 kilometres of new segregated cycle lanes for London.

“Cycle Superhighway 9 will be hugely important in helping cyclists in the west travel safely and inspire many more Londoners to take up cycling for the first time.”

He added: “It also includes significant improvements for pedestrians that will make walking around the local area more appealing and encourage even more people to add both walking and cycling to their daily routines.”

The consultation is open until 31 October and can be accessed here.